The Western Cape is experiencing its worst drought in decades, but it is business as usual at Le Grand Chasseur in Robertson.

Like the rest of the province, the Western Cape arm of Habata Agri has felt the effects of the extreme dry spell, said section manager Hennie de Klerk.

“I’ve been based on the farm for 16 years and this is the worst I’ve seen it,” he said.

“Our water has been cut in half; it’s about 50 per cent of our regular supply. The last good rains were basically three years ago and since then we haven’t had much.”

With young citrus plants and table and wine grapes currently in the ground, De Klerk said they had no option but to continue with business as usual while being frugal with water.

“You can’t stop planting, but if there’s no water then you sometimes have to wait to see what happens before you can continue with anything.”

The dry conditions resulted in many plants suffering and, unfortunately, there was occasionally the need to uproot and replant – an exercise that keeps everyone busy.

To encourage responsible water consumption, De Klerk said farm owners were required to determine how much water was available for the 2017/2018 season and, based on that, decide which orchards to prioritise.

Ensuring crops remained well irrigated while using minimal amounts of water was a tough balancing act, he said, explaining they made use of continuous logging soil moisture probes to provide readings of the soil conditions.

The technology, which acts as a guideline, is used to monitor the state of the soil and the daily reports give an indication of whether there is a need to irrigate.

“We’ve put a lot of probes into the soil so that we can see whether there’s enough moisture for the vines to grow,” said De Klerk.

Flow meters – which ensure the correct amount of water is used by each orchard – can also be used to measure moisture levels.

These, explained De Klerk, indicated changes in water flow, which could mean blocked filters, burst or leaking pipes or faulty valves. This information assists them to attend to problems quickly, minimising wastage.

He said they could maximise the amount of moisture held in soil by understanding the soil type, depth and composition.

“We can enhance the soil’s water capacity by altering the chemical composition by adding lime, gypsum, phosphates and so on. We can also change the depth with deep ripping.”

In addition to this, he said they used wood chips, grape skins and compost to cover the soil around trees and vines to minimise evaporation.

A further measure to save water included recycling water used to flush water filters, he said.

Despite the bleak outlook in the province, with water restrictions having been raised to a level five and no major rains being forecast, De Klerk was cautiously optimistic.

“We are really hoping for rain, but, if it continues like this, I don’t know what will happen. We will suffer.

“I think everything will be better next year; sometime there must be rain. A farmer must always hope for rain.” 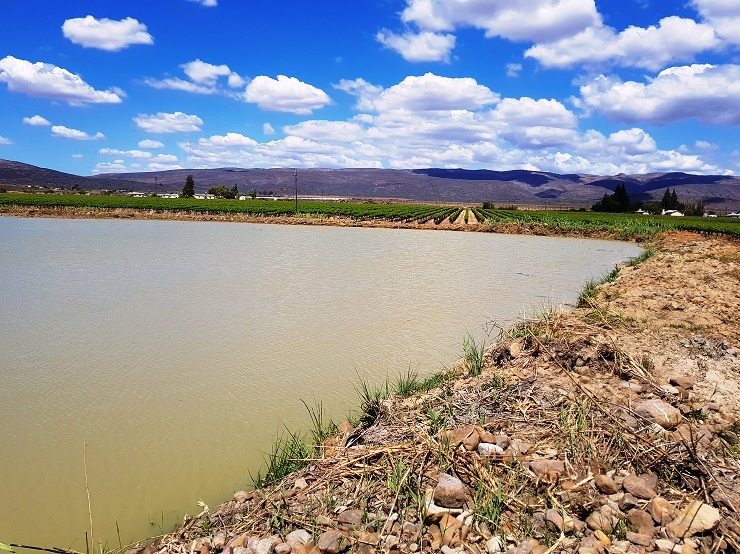