After seven years of success in Port Elizabeth, the SPAR Wheelchair Wednesday campaign celebrated a “spreading of the love” at the Jeffreys Bay handover yesterday.

It followed a pattern this year of breaking new ground as project sponsors SPAR Eastern Cape extended their area of influence to Uitenhage and Jeffreys Bay.

In addition, for the first time a school became involved when Collegiate schoolgirls joined the project, creating the hope that more young members of the community will be part of the campaign in 2019.

Run annually in Nelson Mandela Bay by the Association for Persons with Physical Disabilities (APD), the project takes place each Wednesday in August when community and business leaders are invited to spend four hours in a wheelchair.

The campaign is aimed at raising awareness about the challenges those with mobility difficulties face in society, as well as generating funds to purchase wheelchairs and to support the APD’s Work Centres for those with disabilities.

Yesterday it was the community of Jeffreys Bay who benefited from the project as a total of 36 wheelchairs were donated to those struggling with disabilities.

SPAR EC sponsorship and events manager Alan Stapleton said besides “sharing the love” there were a number of reasons for incorporating Uitenhage and Jeffreys Bay into the project.

“We want to spread the word and the experience of Wheelchair Wednesday, creating more awareness about the campaign.

“In addition, we felt we needed to extend our sponsorship of the project to link with stores outside of Port Elizabeth.”

Stapleton was delighted with the response they received and said it was important to extend the campaign as far as they could.

“The Kouga mayor [Horatio Hendricks] and councillors were very positive about the initiative,” he said.

“The more people who are exposed to the difficulties experienced by wheelchair-bound people, the better.

“It also sends a message about how facilities need to be improved to become wheelchair-friendly.”

APD executive director Brian Bezuidenhout said this was the first time they had been to Jeffreys Bay, which fitted in with their objectives.

“With SPAR wanting to ‘spread the love’, it suited our plan to extend the programme to other areas,” he said.

“The mayor and his committee are very involved and our aim is always to help as many people as we can.”

He added that the 36 wheelchairs went to community members whose situation had been assessed to ensure they would benefit the most from the donation.

Earlier this month, a total of 150 wheelchairs were handed over at a function at the Nelson Mandela Bay Stadium. 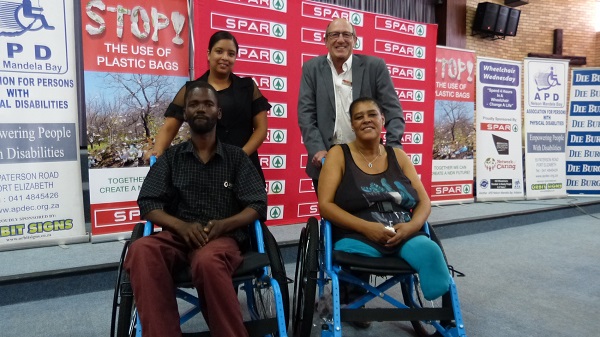