The seedless variety of watermelon grown by Habata Agri is again set to be a major hit with consumers when it arrives on shop shelves in early December.

The Sundays River Valley farming operation will place their major focus on this popular product and will use the seeded variety largely as a pollinator for the main crop.

Habata section manager Riaan van der Merwe said the texture of the seedless variety made it a first-choice selection for shoppers.

Containing hardly any pips, the seedless watermelon is a more compact fruit with a better shelf life. It has flavoursome and crunchy flesh which is one of the reasons why it is in big demand on the overseas market.

However, Van der Merwe said they would be supplying the local market with 100% of their product this season.

“Sometimes the economic situation works against us exporting the fruit so that’s why we are concentrating on providing for South African consumers this season,” he said.

“The seedless watermelon really stands out above the rest and its deep, red colour is a big attraction for buyers.”

Having introduced a much better sorting line last year, Van der Merwe said they had made further changes to improve the look of the fruit.

“We have changed the sorting-cleaning area to nylon brushes and this brings a natural shine to the fruit which is a big attraction for the customers also.

While their current variety was proving popular, Van der Merwe said there was ongoing research to see if it could be improved.

“We are always doing trials with new varieties from the different seed companies to see if there is anything better out there,” he said.

He was confident their crops would provide the yield they sought, but added that they needed good, sunny weather to achieve this.

The fruit, which was planted this month, will be distributed to shops from the first week in December.

“The busiest time of the season is from mid-January until the end of February,” he said. “Then it does quieten down, but we continue to supply retail outlets until mid-April.” 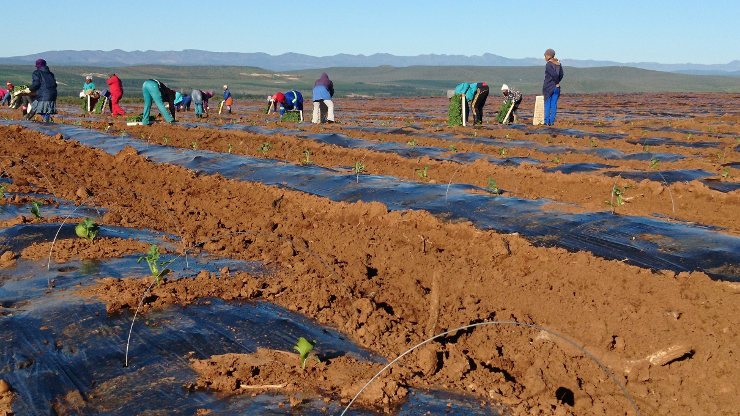 The planting of seedless watermelons is in full swing at Habata Agri in Addo as they work towards the first harvesting later this year. Picture: Supplied