Reports of an injured bushbuck drew concerned residents of Sardinia Bay Golf and Wildlife Estate together for a little spring cleaning around their pride-and-joy properties in Port Elizabeth last Saturday.

Stef Zanchi, who was part of the group, explained the action had stemmed from news that a bushbuck with what looked like a snare around its neck had been spotted in the vicinity.

This, and waste from building sites, triggered the response from residents.

“It came about when people walking through the estate saw some rubbish and wire lying around. We’re all on the WhatsApp group, so when people started commenting, the idea was born,” said Zanchi.

The residents got together and walked through much of the undeveloped sections of the estate, collecting pieces of wire and other material as they went.

Zanchi said he was pleased with how little rubbish there really was.

“We picked up some stuff, but it wasn’t a huge amount. It’s nice to think that if we did this, say once a month, the estate would be completely free of rubbish, which would be great.”

They found no sign of snares and traps and came to the conclusion that, if there had been any, they might have been from the time when the estate was a dairy farm.

Zanchi said they had received positive feedback from the group and similar initiatives might be undertaken at a later stage.

“There was talk of having a braai or something at the golf club when we do this again. It could attract other people to join us.”

He said it was great when people contributed to something like this as “we live here after all”.

Zanchi, who joined the Sardinia community in April, said he had been drawn to the estate because he had spent many a Sunday afternoon at Sardinia Bay beach when he was a student.

“I went to school in Grahamstown and then studied at what was then the University of Port Elizabeth.

“We used to come out to braai at Sardinia Bay and on the way back we’d stop at Apron Strings for scones, so this area has always attracted me.”

After years of working in the human resources field, retiring at Sardinia was the “pot of gold at the end of the rainbow”, he said.

However, he felt the privilege of living in such a haven should carry some degree of responsibility, especially when it concerned the four-legged residents of the estate.

All people should be considerate towards the wildlife, he added.

“I know there have been educational talks (for residents) but it would be beneficial if we offered it again, especially for newcomers and those who missed out last time.

“Everyone should know how to treat the animals in the estate so that we can enjoy their presence to the fullest.” 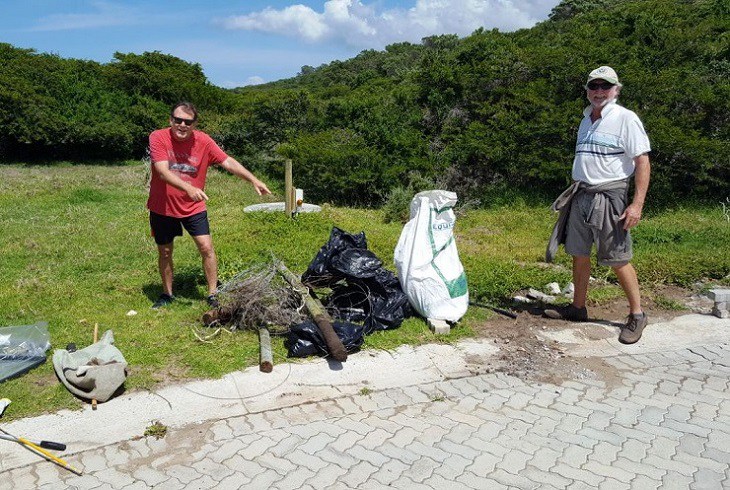 Stef Zanchi, left, and Peter Wilson were among the Sardinia Bay Golf and Wildlife Estate residents who got together for a spirited cleaning operation. Photo: Supplied