Sardinia Bay Golf and Wildlife Estate residents can look forward to an active second half of 2018 with the new recreation centre expected to be handed over to the Home Owners’ Association (HOA) within the next fortnight.

Members of the HOA had been closely involved with the project, especially the interior finishes, Gibbs added.

Adele Hunter-Smith, an interior decorator who has been working on the designs for the centre, said the project was coming along nicely.

“All of the basics are done. It is just about furnishing the place now,” Hunter-Smith said.

She said the centre would be a boon for residents of the estate.

“It will be a good meeting point. It can be a place where they [residents] come together to watch rugby or soccer – all the big matches – on television.

“Bigger groups can get together to use the braai facilities at the centre instead of getting together at a house.”

Hunter-Smith, who also stays on the estate, says various social groups in the complex could now use the centre as a neutral meeting spot.

“We have many walking groups in the estate who can use the centre to get together.

“There will be a notice board inside the centre so all the events happening in the estate will be put up. It will be an easy way for people to communicate within the estate.

“We will also be looking to hold bigger functions and have big meetings in the centre’s hall.”

Having the swimming pool and tennis court at the centre should increase property values in the estate, Hunter-Smith said.

“The pool and tennis court are a huge plus. Many people in the estate have not built pools because they knew there would be one installed at the centre.

“Then the upkeep of the pool would not be totally on them either. Most people also cannot afford a tennis court, so that would be a huge positive.

“I think many people are going to make use of it,” she added.

An avid tennis player herself, Hunter-Smith, who has been playing for five years, said she was very excited about the new addition.

She had until recently been dividing her time on court between a friend’s place and the Victoria Park Tennis Club.

“I haven’t been playing much for the past two years so I’m thrilled to have the tennis court.

“My daughter is a keen tennis player so for me it’s great because it means we’ll be able to play together. It will bring families and our community together, increasing community spirit.

“The tennis court adds huge value. It’s somewhere to play right on your doorstep and in such a beautiful environment.”

The official opening of the recreation centre will follow completion of the furniture fit-out and the handover from the developer to the HOA. 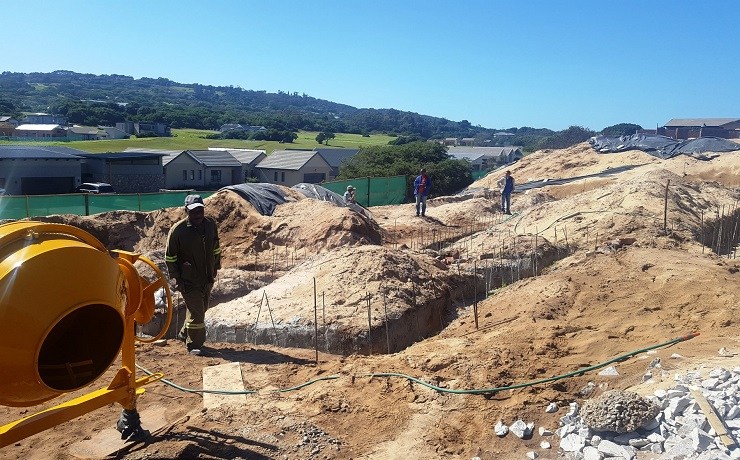 The tennis court and recreation centre at Sardinia Bay Golf and Wildlife Estate are due to be completed within the next couple of weeks. Photo: Full Stop Communications