When Jane and Don Robertson moved into their dream home on Sardinia Bay Golf & Wildlife Estate last year, they looked forward to a peaceful retirement focused on gardening, model boat-building and fostering friendships in an idyllic environment.

The former Johannesburg couple hadn’t expected to be involved in a heroic effort to save the life of an injured baby springbok.

But, after a month of love, nurturing and treats, little Amber has left her human foster parents to join the estate’s resident springbok family.

“Little Amber broke her leg when she was still very tiny,” said pharmacist Jane, who retired to the estate with husband Don, a medical company CEO, last April.

The estate’s wildlife manager found the little buck late last year, splinted her leg and took her home to recuperate, where his children named her Amber.

“When the splint was removed, he brought her to us so that she could get used to being on the estate,” said Jane.

“We cared for her for a month in our backyard, as she needed to grow before being released into the greater estate. She was only two months old.

“We have a resident caracal (rooikat) and she would have been easy meat for it while still so little, and needed to build up some resistance to diseases carried by ticks in our area.”

Amber became quite attached to Jane and Don – happily eating out of their hands. She was wary of other residents, though, as being afraid of humans is a wild animal’s natural defence mechanism.

The little bokkie was quite at home with the Robertsons, grazing grass in their backyard, snacking on new shrub leaves and pinching flowers.

“We also gave her herbivore pellets as a treat every morning,” said Jane. “Consisting mostly of grass and molasses, they are probably like sweets.”

Placing pellets around the house also attracted adult springbok – there are three male adults on the estate.

“They discovered little Amber very quickly and spent most of the day close to the house.

“It was the sweetest thing to see the biggest adult touching noses with Amber through the gate.”

Jane said the prowling caracal walked past the house, showing them that it knew she was there.

“Because of this, we decided to keep her an extra week to allow her to get a little bigger, but she had other plans. By that Saturday, she had made it very clear that she needed to get out of captivity.”

The Robertsons finally released their precious charge in early February.

“It was an anxiety-filled day, as we had to wait for the adult, wild springbok to welcome her to the greater estate. Finally, she ran through the gate to freedom.”

In future, the Robertsons will always know where their little Amber is, as she has been fitted with a large yellow tag.

“She seems relaxed and very happy. She has her freedom at last.” 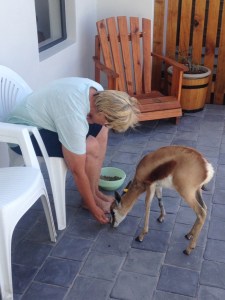