Marco Joubert was pleased to be back on the winner’s podium after a long struggle with injury as he successfully defended his title in the Bestmed-Makro mountain-bike race near Port Elizabeth today.

The 21-year-old, who grew up in PE but now lives in Stellenbosch, defeated Jason Meaton in a sprint finish in the 70km race held at the Hopewell Conservation Estate, St Albans.

Riding for Imbuko-Momsen, Joubert crossed the line in 2:51:47, with Meaton just a second behind. Grant Daly was third in 3:04:29

Collarbone injuries kept Joubert sidelined for nearly three months earlier this year and he said today’s victory was a boost to his confidence.

“It’s been a long struggle with the shoulder injury so it feels good to be back on form and taking the win,” he said.

He put the hammer down from the start and managed to break away from the pack, but said some confusion over the route markings meant he had to change his strategy.

“After setting a high pace and getting away early on I didn’t want to get lost so I waited for Jason and Grant, who were second and third.

“We rode together for a while until I managed to get away again. But then the same thing happened so I had to wait and Jason and I worked together from then.

“We waited it out for the sprint and I managed to edge him in the final surge for the line.”

In the women’s race Anriette Schoeman, of Port Elizabeth, regained the title she won two years ago, also managing to break away from her challengers early on.

This was the 41-year-old’s fourth mountain-bike title at the race in five years and came after she won last week’s road race for the 18th time.

Although the weather was better than last week’s conditions when rain and wind battered the riders in the 106km road race, Schoeman said the mountain-bike event represented a tough challenge.

“With all the recent rain the routes were quite muddy so that made it a testing ride,” she said. “But then that is all part of mountain-biking.”

The Africa Silks-Bestmed rider added that there was a lot of single-track on the route and she managed to get a gap early in the race.

“But there was a route glitch at one stage so I had to turn around and rejoin the group.

“However, I managed to get away again and was able to pace it nicely back to the finish line to take the win.” 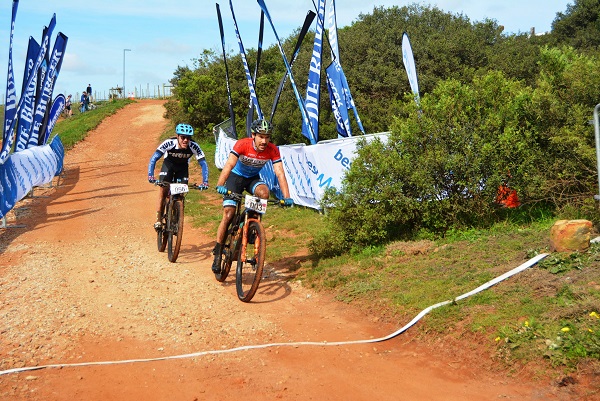