The University of Johannesburg men’s team will not make the mistake of looking too far ahead when they defend their title in the University Sport South Africa hockey tournament next month.

Following the Varsity Hockey competition earlier this year, the country’s top student players will now gather in Bloemfontein from July 2 to 6 for the USSA event.

UJ won the tournament in thrilling style last year, but a younger team received some hard lessons in Varsity Hockey in May.

They will be strengthened by a number of senior players who were unavailable earlier, but UJ Hockey manager Elize le Roux said their focus would be on each match as it happened.

“Going into the tournament our sole aim initially will be working towards a top-four placement,” she said.

“We do feel we have a team capable of making the semifinals because the men will have three senior players back in the mix.

“This will add experience and calmness on the field, the sorts of qualities you need to progress in this competition. After the pool fixtures, we will reset our focus.”

She added that the Varsity Hockey experience had been a learning curve for the young team.

“With the seniors back, hopefully our decision-making and ability to create opportunities and to finish them will be areas for improvement.

“The USSA tournament is intense in its own right. There are no bonus points to fall back on at USSA and you have to put three points in the bag from day one.”

Le Roux added that the women’s team, who were runners-up last year, would have many players taking part in the USSA week for the first time.

“We believe in our processes and feel that a top-four spot is realistic to focus on initially. We will be taking it game by game in our pool matches from Monday to Wednesday and only then worry about the play-offs.”

While there was a mix of experience and youth, she said teamwork would play a fundamental role in their approach.

“The unity of the players will be the key for the teams’ success, with the coaching and managing staff aiming to put a quality performance plan in place.”

Le Roux felt events such as these continued to play an essential role in the future of the game at UJ.

“They provide an opportunity to market a brand of hockey that hopefully resonates with young players.

“The overall aim is to present a positive view of UJ as an academic and sporting institution.

“The USSA week is also used to qualify for Varsity Hockey so it is vital for UJ to do well, providing more platforms for our players to showcase their skills.

“Success will depend on making a good start and then sticking to our routines to keep the players focused on the week ahead.” 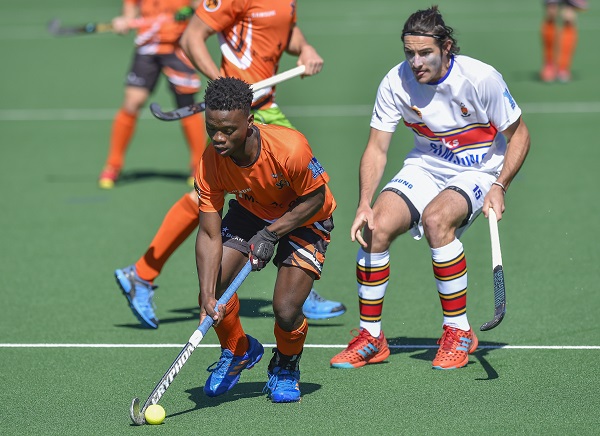 University of Johannesburg’s Andile Ndlovu, challenged here by UP-Tuks player Bradley Sherwood, will be a key member of the squad when they defend their University Sport South Africa men’s hockey title in Bloemfontein from July 2 to 6 Picture: Saspa