Attack will be the nature of the game as Woodridge go about defending their title when the PE Central edition of the SPAR Eastern Cape Schoolgirls Hockey Challenge takes place at Westering tomorrow.

A total of 10 schools, divided into two sections, will vie for the honour of representing the region at the provincial finals which will be held at Woodridge, just outside Port Elizabeth, in August.

The co-ed school won the tournament in thrilling style last year and coach Maxime Bird said there was again an air of excitement in their camp as they prepared for tomorrow’s showdown.

“The girls are really looking forward to this challenge and for a school like ours, who don’t have that many matches during the year, this is a great tournament in which to be involved,” said Bird.

“There is a lot of intensity during the day because the matches are played over such a short time [15 minutes] and it’s a matter of attack, attack, attack.

“It’s not the sort of format where you can just park the bus and defend because a draw doesn’t mean much, so you really have to aim at scoring goals.”

Coming at the start of the season, Bird said they had not had much preparation, but all the teams “are in the same boat”.

“We only chose our side last week, but have a few players back from last year and some nice young talent with quite a bit of depth.

“I think it will all come down to how the team gels on the day.”

She added that schools such as Collegiate and Pearson would always be strong contenders, while Alexander Road were also a difficult side to face in these matches.

“They play a hard-running game and are always tough in this format because they attack so much.

“You really have to be on the alert the whole time, in attack and defence, to have a chance of going through.”

Divided into two groups of five, the teams will play a round-robin section before going into the play-offs.

The top two teams in each pool will qualify for the semifinals, starting at 2.35pm. The final is scheduled for 4pm. 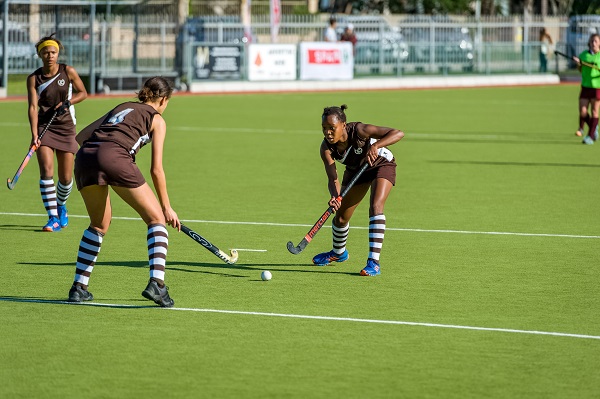 Woodridge’s Edith Molikoe passes the ball to Lauren Booysen as Chere Jacobs (left) looks on during a match last year. The team will be defending their title in the PE Central tournament of the SPAR Eastern Cape Schoolgirls Hockey Challenge at Westering in Port Elizabeth tomorrow. Photo: Supplied