The Emperors Palace Classic road race in Johannesburg this weekend has received a notable boost after being included under the Bestmed umbrella of sponsored events in South African cycling.

The two-day cycling festival, based at the Kempton Park casino, will provide cyclists with a choice selection of events, including two mountain-bike offerings on Saturday and two road races on Sunday.

For the first time, loyal SA cycling sponsors Bestmed have become involved with the event, extending their reach in the sport thanks to their relationship with race organisers ASG Events.

“The opportunity to become involved in the Emperors Palace race came about while ASG and Bestmed were evaluating the races we would sponsor for 2018,” said Wicus Kotze, Bestmed executive: managed healthcare.

“This event is the perfect fit in our road-race calendar for the year and it assists us to promote our brand to those cyclists who might not get to our other events.”

At this stage Kotze said they had entered into an agreement for one year, but were busy with the process of reviewing their position for the future.

“An announcement will be made once this process is done.”

He added that Bestmed had been involved as a cycling sponsor for six years, helping to add to the prestige of many premier events on the national calendar.

“We do believe we have created some value for some of the prominent road races on the calendar such as the Tour of Good Hope, the Jock Cycle Tour and the Jock Classique, the latter being a one-day three-stage event.

“Now we are delighted that cyclists can also say they participated in the Bestmed Emperors Classic.”

As a medical aid scheme, Kotze said their natural priority was to look after the healthcare of their members.

“Although we will always be there for those who are sick and in need of professional healthcare, we need our members to be healthy as well.

“This is the same in every insurance business – you can not only insure reckless drivers, you also need to encourage motorists to drive safely.”

He said through their sponsorship in sport, and cycling in particular, they felt they were able to create brand awareness among not only the younger generation, but also the fit and healthy decision-makers in business.

“As a medical scheme we promote a healthy lifestyle and being involved in cycling gives as the opportunity to reach not only the professional sportsman, but also those who do this only on weekends.”

Kotze said they felt the Emperors Classic was perfectly placed on the calendar to attract a strong entry.

“The route is different to some races, which have more vertical climbing and mountain passes.

“This is a fast and flat route, which always makes for an exciting finish. Plus, it comes soon after the Cape Town Cycle Tour when the interest in cycling is high, while it is a seeding event for the Cape race.”

Billed as the Race of Dreams, the feature race on Sunday, won last year by speed merchant and current Cape Town Cycle Tour champion Nolan Hoffman, will be over 98km and will follow the same route that has been in use since 2016.

There will also be a 48km road race on Sunday, with mountain-bike offerings of 50km and 25km on Saturday.

Making sure there is something for everyone, the festival also has a kiddies’ element, with the ever-popular Emperors Palace Kids Classic for ages 3-5 and 6-8 being held on the Sunday. 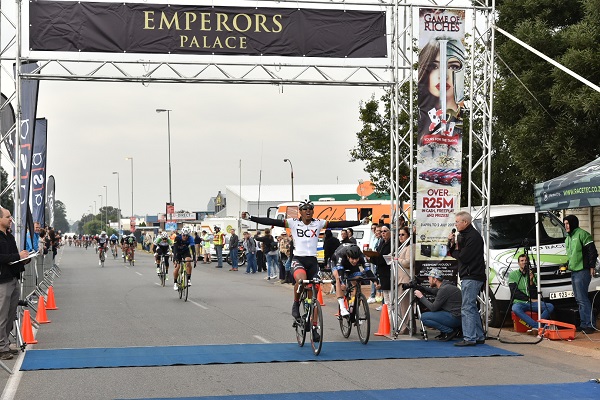