The University of Johannesburg rugby team confirmed their upward progression in the Varsity Cup when their registered their second decisive victory in succession in Johannesburg on Monday.

After dismantling the potentially dangerous Free State University outfit last week, UJ went on the rampage as they outclassed Madibaz 69-8 in their latest fixture.

The result propelled them to fourth place on the log, but the battle for the play-offs remains intense with six teams still having a chance of ending in the top four.

Pleased with the team’s fine recent performances, UJ coach Werner Janse van Rensburg said it was not a case of “waving a magic wand”, but rather gradual improvement during the season.

“With hindsight, if you look at some of our earlier games we met Maties [Stellenbosch University] on a night when they were brilliant and they haven’t shown that level again,” he said.

“And then we lost by just three points to NWU-Pukke in Potchefstroom when a lot of people felt we had the better of the game but didn’t get the reward on the night.

“From there it’s been a progression and a situation where everything is coming together.”

Whereas previously, he said, UJ had not reaped the rewards of their efforts, the hard work they had put in was now paying off.

“The plans are working nicely and things like unnecessary knock-ons have disappeared and there is better discipline and better protection of the ball. The guys are now getting the reward for that.”

Janse van Rensburg’s squad underlined this improvement when they outran Shimlas in Bloemfontein to win 49-12, despite playing with 14 men after receiving a red card.

Later they were down to 13 men for a period when they also received a yellow card.

The coach said they often had “weird matches” against Shimlas.

“It seems that either we get 40 or more points against them or they return the favour and do the same thing to us the next year,” he said.

“But we did have an awesome week of preparation in that match, especially with our forwards having a run out with New Zealand side the Hurricanes before their Super Rugby match against the Bulls,” he said.

“There was a lot of good stuff that we carried over into the game against Shimlas and we started the match well.

“Even when we got the two cards, the guys fought really hard and they reaped the benefit of that.”

He said what had stood out in their recent matches was the performance of the forwards, who had taken control upfront.

Up against arch-Johannesburg rivals Wits at Wits on Monday, Janse van Rensburg said this seventh-round match was always going to be important, whoever they played.

“This time our match against second-placed Wits will be a bit different,” he added. “Taking the last few years’ results into account, all the pressure would have been on us as the favourites.

“But on Monday we will go in as the underdogs, so it’s an interesting position to be in.

“I believe it will be good for our guys and a chance to see the character they show as the underdogs.

“The reality is that in this competition you can face adversity at any time and what’s important is how you handle that to get the results you want.” 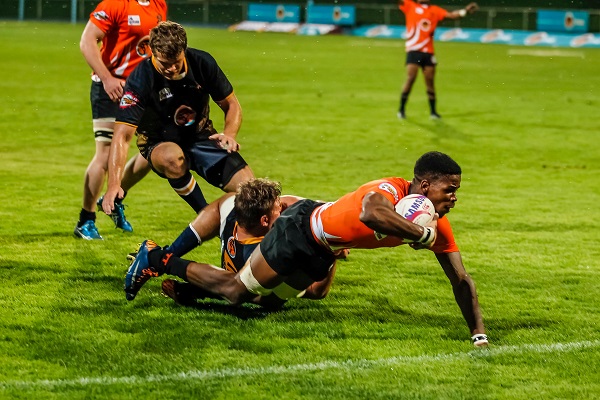 University of Johannesburg’s Siyabonga Luwaca crosses for a try in their 69-8 win over Madibaz in the Varsity Cup rugby tournament this week. Photo: Dominic Barnhardt/Varsity Sports