Years of dedication to the sport have all been worth it for University of Johannesburg hockey star Gareth Heyns following his selection this month for the Commonwealth Games.

Although he has a number of national caps under his belt, the 26-year-old central defender is over the moon at being included in the national squad for the Games on the Gold Coast in Australia in April.

“I really didn’t think it was something that would happen, so when I found out I was going it was one of the happiest moments of my life,” said Heyns, who is in his masters year of a marketing degree at UJ.

“It has made all the hard work, long days and nights of training and difficult times worth it.

“I have played [for SA] before but I always thought that if I could compete on a stage like this it would be the ultimate reward. It’s been one of my major goals.”

The UJ star is, however, under no illusions about the task which lies ahead. South Africa are ranked 15 in the world and he said they had a big challenge facing them.

“But we have a lot to prove and a lot that we can achieve as a squad.

“We have a group of guys pushing for chances all the time and it keeps everyone on their toes, training to be the best we can. This creates the best environment we could ask for.”

He said most teams had been playing a series of matches to prepare for the Games, but South Africa did not have the same opportunities.

“We have our challenges where we unfortunately aren’t in the same position, but everyone is training hard to be in the best shape possible for this tournament.

“We are also trying to build towards something bigger for aspiring national hockey players, so it would be nice to set a platform for the guys coming through where they can carry on competing on this stage.”

He said their strength lay in having a good mix of experience and youth.

“The guys that have been there before are always willing to help and provide knowledge where possible so that the rest of us can step up our own games,” said Heyns.

“We are a very hard-working and focused unit and I believe that this is definitely something that works in our favour.”

Having grown up in Primrose in Johannesburg, where he still lives, Heyns took up the game of hockey 14 years ago.

“I started playing hockey properly when I was 12,” he said.

“The only reason I started was because of my brother, Kyle. He was at Jeppe High and I pretty much followed everything he did.

“He was and still is my role model, so any opportunity I had to be like him I took it.”

Heyns, who was educated at Bedfordview Primary and Jeppe High, said his parents instilled in them an attitude of always being the best they could be.

“That has always stuck with me,” he added.

Once he left school, he said UJ had provided the platform to compete at an elite level, while offering the opportunity to pursue his studies.

“The staff were always willing to help wherever they could to make the experience as easy and non-stressful as possible.

“I have made so many valuable friendships and memories here that I wouldn’t have wanted to do it any other way.”

With his family and friends his staunchest supporters, Heyns also paid tribute to UJ coach Garreth Ewing, under whose tutelage he has been playing since he was 15.

“He has been a big part of my progression as a player and a person. His input has helped me develop and understand the game in a different way.” 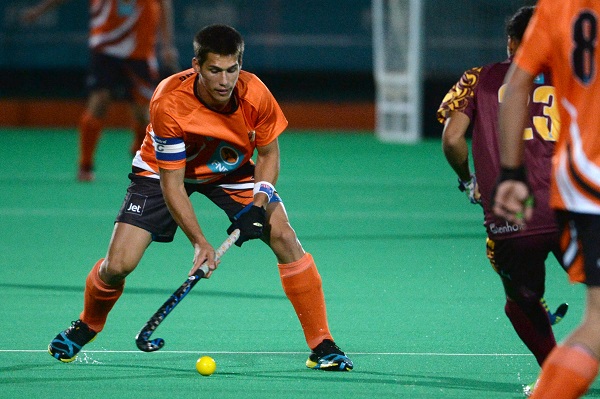 University of Johannesburg hockey star Gareth Heyns is thrilled to have achieved his goal of competing in the Commonwealth Games in Australia in April. Photo: Saspa