University of Johannesburg coach Werner Janse van Rensburg is eyeing a fresh start when his team kick off their Varsity Cup rugby campaign with a home game against Stellenbosch on January 29.

The teams last met in last year’s semifinal, which Maties won. It was the second year in row that UJ lost in the last four.

While there were lessons to be learned from those disappointments, Janse van Rensburg said today each year’s competition started as something new because of personnel changes.

“In this competition you will never have the continuity that comes with a settled squad of 30 to 35 players with whom you can work over a period of years,” he said.

“Players complete their degrees or drop out academically, and some are signed up by provinces due to their progress.

“So there are a lot of variables to deal with. Your squad changes significantly each year.”

However, the UJ mentor added that they had achieved some sort of balance between experience and youth. Their squad may include nine players who have featured in two or more Varsity Cup competitions.

“We probably have about 13 to 15 first-year students on our books. This is their chance to make a name for themselves,” said Janse van Rensburg.

“We find some guys fit in nicely from the start, but others adapt more slowly, so it really is a fresh start each year.

“That is something we have become accustomed to. And everyone’s in the same boat. It’s a matter of taking on the challenge.”

Referring to the early start to the competition, he said their planning was going as well as could be expected.

“You won’t get it to be perfect at this stage of the year, but we are doing the best we can with the time at our disposal.

Having seen his side fall at the semifinal stage twice, Janse van Rensburg said success was all about taking opportunities.

“That’s the way you have to play to get into finals. We’ve learned harsh lessons in the last two years.

“We played well to get into the semis, but on the day we could not quite pull it off.”

Looking ahead to the new season, Janse van Rensburg said UJ were prepared to absorb whatever came their way.

“You learn something all the time in this competition because you play in so many different circumstances.

“We’ll take it game by game, with our focus now on the Maties fixture.”

He described the Stellenbosch side as one of the best in the competition; chosen from the biggest player base.

“You can expect to see a classic Maties team of big forwards and strong backs, and they will run from everywhere.

“But we have our own standards and I firmly believe we will be competitive again. This is a competition that has always been open; any team can win on any given day.” 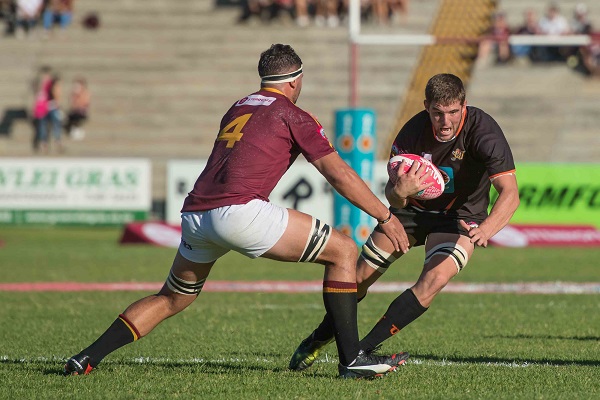 Loose forward Adriaan Bester (right) will add valuable experience to the University of Johannesburg rugby team when they take on Stellenbosch in their opening game of the Varsity Cup competition in Johannesburg on January 29. Photo: Anton Geyser/Saspa