The FNB Madibaz rugby team received some useful insight into the new Varsity Cup power play rule when they had a practice match against Stellenbosch in George last weekend.

The encounter with Maties was the first in a series of warm-up outings the Nelson Mandela University team will have prior to their opening game against University of Cape Town in Port Elizabeth on February 5.

The FNB Varsity Cup organisers have introduced a power play rule for this year’s competition, hoping the experiment will encourage coaches to employ exciting tactics while fostering a generation of dynamic and adjustable players.

The rule will allow the team calling the power play to remove any two nominated backline players from the opposition side for three minutes.

A team can only call a power play while they are in their own half of the field. It must be called by the captain, and can be done only once.

If the team whose players have been removed score a try during the power play period, it will be worth seven points instead of five.

After trying out the rule for the first time in a match situation at the weekend, Madibaz coach David Maidza said they had gained some useful insight.

“In reality, we are still working on the systems that will best suit the group,” he said.

“Testing the rule against Maties, we did find it challenging but we saw what we had to improve on.”

The Madibaz mentor said it was a fairly difficult concept to grasp as they normally planned their strategy for situations when all the players were on the field.

“But the rule is there for 2018 and we have to work out a strategy to handle it in the best way to ensure it does not leave the team in disarray.”

Maidza said the Varsity Cup competition had a tradition of trying out innovations and they had learned over the years to adapt to the requirements.

“At first, experimental rules might lead to situations that won’t suit conservatives like me,” he said. “But in the end such rules have become the norm in Varsity Cup.

“I hope this will be the case with the power play rule.”

Since the practice with Maties they had worked out in which areas they needed to improve as they continued their Varsity Cup preparations, Maidza said.

“I feel we did well in the areas that we worked on for the friendly and it is now time to start putting the full structure in place for the next warm-up matches.” 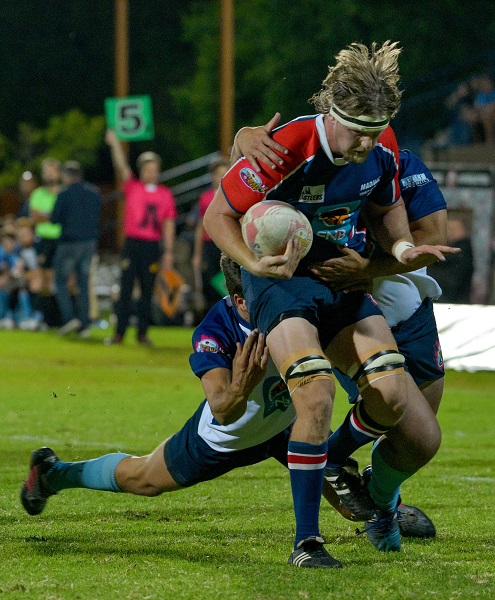 Madibaz rugby player Justin Hollis will be keen to make an impact in the Varsity Cup this year. The Nelson Mandela University team had their first outing with a practice match against Stellenbosch in George at the weekend. Picture: Frikkie Kapp/Saspa