The event was a huge success, even though the hosts missed out on the overall title, Nelson Mandela University surfing manager Melinda Goosen said.

“In the end there was very little in it, but credit to UCT for their good performances over the three days.”

It was an enthralling contest and to lose by just eight points was no disgrace for the hosts.

“In an event where points are earned in their thousands for individual performances, to lose by just eight points – 38 760 to 38 752 – is as close as it gets in surfing,” Goosen said.

The Madibaz men were first in their category and the women’s team finished third.

Goosen said the standard of surfing, particularly in the men’s division, had been extremely high and she complimented the Madibaz team for their competitiveness.

“The guys did very well and at the start of day two we were the only university with seven guys who had qualified for round three.

“Our eighth surfer went into the repo round and eventually also qualified for the third round. From there, we had five surfers in the quarterfinals.”

Madibaz had been banking on Jean du Plessis to lead the way, but Greg Cuthbert was their standout surfer.

“Greg is a first-year and showed really great potential,” Goosen said. “To lose in the final against Shaun Joubert (Stellenbosch), who is a semi-pro surfer, was no shame at all.”

Madibaz also won the silver medal in the women’s section when Britney Linder finished second to Sam Sutton of Maties.

It was the first time the event was held in Port Elizabeth and Goosen said they were delighted with the way it had gone.
“All the universities complimented us and the feedback we received was that we had set the bar for future years,” she said.

“Overall it was a great success and to have our product sponsors on board elevated the event to the next level.”

Contest director Shirley Fairall, of Port Elizabeth, agreed and said it had been “a fantastic competition”.

“We had a great bunch of well-mannered and well-behaved students and the judging panel did an excellent job,” she said.

“I believe the students were really happy with what they got. Everyone received a goodie bag with a T-shirt and wax, there was a great opening function at Pine Lodge, as well as refreshments on the beach and medals and prizes from Billabong for all the finalists.

“Well done to Melinda and her committee for organising all this,” she added. 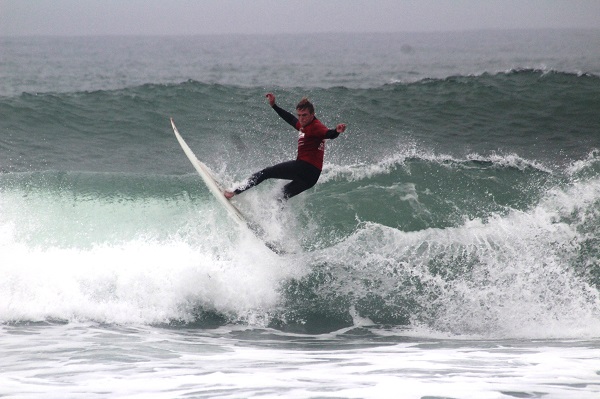