East London’s festive season kicked off with a bang when the Daily Dispatch Summer Fun Run, supported by SPAR Eastern Cape, was held in excellent weather on Sunday.

After hosting the Family Challenge for several years in the city, SPAR EC decided to throw their weight behind the highly popular Summer Fun Run, which has been part of the local holiday programme for nearly four decades.

About 2 000 runners descended on Orient Beach on East London’s Esplanade to join in the fun on a day that had something for everyone.

A variety of race options ranging from 8km to 4km were available, plus a wheelchair event over 4km.

SPAR EC sponsorship and events manager Alan Stapleton said they had been thrilled with the response, describing the event as “just what the doctor ordered”.

“This really was a beautiful event and something I am sure we can grow as we work together with all those involved,” he said.

“From the pre-race buzz to the drum majorettes, Border Bulldogs taking part and Algoa FM Afternoon Drive programme keeping everyone informed, it was a great start to the holiday period.”

While Stapleton paid tribute to the winners of the various events, he acknowledged that the day was all about having fun.

“The winners won and the runners-up were happily disappointed, but this was all about providing the East London people with a chance to go out and enjoy themselves through healthy exercise,” he said.

“We feel it is important to stay engaged with the community and this is a perfect vehicle for us.”

A key element of the fun run is to raise awareness of people with physical disabilities and to generate funds for the Association for the Rehabilitation of Persons with Disability (ARPD), which is based in East London.

Stapleton said he was happy to report that they were able to donate R15 000 to ARPD.

“There were many people in wheelchairs and people with prosthetics who took part in the race. It was amazing to have them involved with the run and to see their enthusiasm.

“And then they joined in the post-run celebrations and partied with us like everyone else.”

He added that the Sweethearts Foundation, who collect bottle tops and bread-bag tags for recycling and then purchase wheelchairs from the income, were also able to donate a chair to ARPD on the day.

For further info, go to www.summerfunrun.co.za. 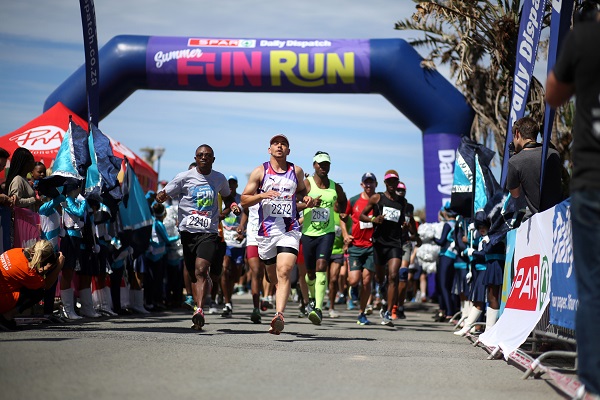 Thousands of runners enjoyed the chance to get some exercise in the Daily Dispatch Summer Fun Run, supported by SPAR Eastern Cape, in East London on Sunday. Photo: Mark Andrew