The Billabong Madibaz squad are banking on a team effort when they try to regain the overall title in the University Sport South Africa surfing competition, starting in Port Elizabeth on Friday.

Not only will the Nelson Mandela University team be aiming for top honours after their victory in 2015; they will be doing so in Nelson Mandela Bay for the first time.

They will be up against four other universities over three days of competition, with Stellenbosch, Cape Town, Rhodes and Varsity College all in the mix.

Madibaz Surfing Club chairman Lee Allers, who is part of the squad, said they had lost some experienced surfers from last year’s line-up, but he was confident of their chances.

“We had an experienced team last year, but the conditions (at Victoria Bay) were very trying,” he said.

“The goal for this year is to bring the team trophy back to Madibaz Surfing, and to get at least some of our surfers into the individual finals.”

Allers said only four members of last year’s squad were back this year. The team seemed to be in transition, but he felt they had a fantastic all-round squad, “more than capable of winning the overall event”.

“The team members are extremely excited and pumped up to do well,” he said. “I feel the vibe will start to build as they return to PE this week, which will be crucial for our mental planning.

“We have had good preparation because the team was selected in May and we have been running competitions during the year, socialising together and sharing our passion for the ocean.”

While they had a good understanding of local conditions, the Madibaz squad also included surfers from all over the country, he added.

“The weekly forecast shows light offshore conditions with swell periods ranging from eight to 15 seconds. The forecast will get more accurate closer to the event, but I feel we will be able to cope with any conditions Mother Nature throws at us.”

“If the forecast is accurate, the south-westerly winds would be perfect for the bay. The best and most consistent spot for the event would most likely be Pipe at Pollok Beach.

“We would love to see the Madibaz getting lots of support as they strive to regain the title.”

Goosen added that Jean du Plessis, Dane van Greunen and Keegan Wright would be strong contenders in the men’s division, with Britney Linder leading the charge for the women.

With a campus in George, the club had hosted the USSA tournament in Victoria Bay previously and they were delighted to have it in PE for the first time, she said.

“We have received very good support from sponsors Billabong, SA Bottling and Northweek through products and infrastructure. We are extremely grateful for this backing to help us make the event a success.” 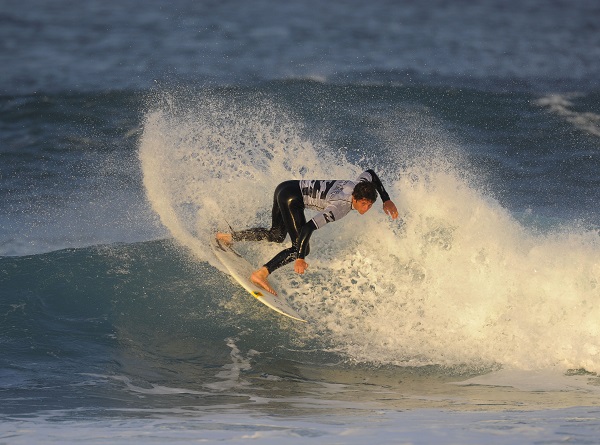 Jean du Plessis will be hoping to make an impact for the Billabong Madibaz surfing team when they compete in the University Sport South Africa championships in Port Elizabeth from Friday to Sunday. Photo: Supplied