A motivational talk by cycling great Ashleigh Moolman-Pasio is set to rev up participants ahead of the fourth and final round of the Madibaz XCO Series at the Nelson Mandela University’s George campus on Sunday.

Moolman-Pasio, who recently returned from racing in Europe, will be one of the guest speakers at a mountain biking symposium at the venue on Saturday evening.

The 31-year-old continued to impress on the world circuit this year and made history when she climbed to third in the UCI World Rankings – the highest by a South African – on the back of a stellar season.

She placed seventh in the individual time-trial at the UCI Road World Championships in Norway last month before crashing out of the road race.

The 2012 Olympian is no stranger to adversity and bouncing back from it.

In October last year, she crashed and broke her hip which set her on a lengthy path to recovery and, most recently, she was forced to withdraw from the Cape Pioneer Trek due to illness.

The national time-trail champion said she hoped to motivate riders who attend the talk by sharing her experiences and advice.

“Cycling is probably one of hardest sports in the world in that there are so many aspects that are out of our control, so there are plenty of obstacles that have to be overcome,” said the Stellenbosch alumnus.

“I’ll be talking about how I’ve managed to overcome adversity and give advice on how one can handle this disappointment.”

Moolman-Pasio said events such as the symposium provided valuable opportunities to engage in and encourage dialogue, which she felt was important to help move the sport forward.

“It’s really encouraging to see what’s being done on the mountain bike scene in this country,” said Moolman-Pasio. “It’s become quite a popular sport at schools and you’re seeing great numbers of participation in the leagues across the country.”

She said the discipline was the perfect springboard for youngsters.

“Road cycling unfortunately has somewhat died in this country and I think that is somewhat understandable, to an extent, because our roads are not very safe for training or competitions.

“So the natural place for youngsters to be developing their skills is on the mountain bike because we have such great trails and safe environments.”

She said mountain biking provided an element of fun that allowed aspiring cyclists to do what they loved and hopefully that translated into careers.

Moolman-Pasio started competing at the age of 22, after first trying her hand at triathlon and duathlon.

Although she competes solely on the road, she took up mountain biking later in her career and often enjoys South Africa’s trails when returning from Europe.

“I’m competing in Wines2Whales next weekend so I’m hoping to be back on the bike soon and will possibly compete this weekend as well.”

The talk will take place at 4.30pm on Saturday and is open to everyone. Send an e-mail to nandipha.september@mandela.ac.za to book your seat.

Go to www.madibazmtb.co.za for more information. 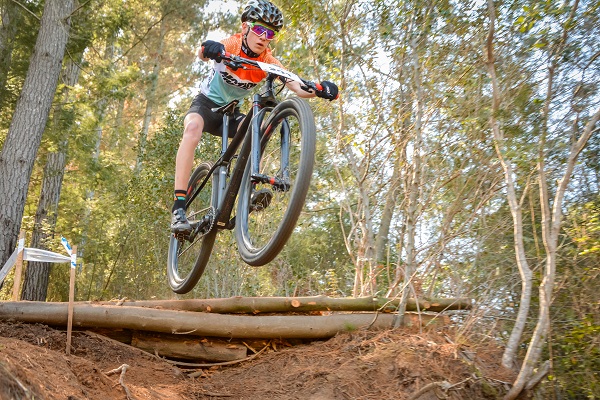 Ashleigh Moolman-Pasio, who will give a motivational talk at Nelson Mandela University’s George campus on Saturday evening, believes mountain biking is the perfect platform for youngsters to develop their skills. Photo: Chris Brooke