With cycling an integral part of their culture, the Danish embassy in Pretoria have thrown their weight behind next week’s Tshwane Classic, with 50 of their members set to compete in the various races.

Shaping up as one of the country’s major road events, with more than 4 000 cyclists having already entered, the feature race in Pretoria will be over 98km, starting and finishing at the Voortrekker Monument.

Organisers ASG Events have joined hands with the Tshwane Municipality to arrange total road closure for the main event as well as for the 60km and 20km supporting distances.

The involvement of the Danish embassy will add an international flavour to the event and Kristoffer Moller, a sector adviser in the smart and sustainable cities section, said it was an easy choice for them.

“It’s very sustainable, good for your health and has lots of other benefits.”

Being an avid cyclist, Moller, who is married to a South African, has ridden in events such as the Bestmed Jock Classic and 947 Cycle Challenge.

He said when they saw Pretoria was on the racing scene in the form of the Tshwane Classic they had no hesitation in becoming involved.

“We realised here is an aligned agenda so let’s all chip in and make it a success,” added Moller. “It is also a way for the embassy to pay something back to the city where it’s located.

“All the embassies are here and we want to be part of city life, and not just be expats who come in and out every two years. This sort of involvement is very important to us.”

Through the Danish ambassador, he said they had reached out to other embassies to support the event too.

Moller said their entry had created much spirit among the staff members who would be competing, while it gave them an opportunity to again work with the Mamelodi group, the Tshwane Urban Riders.

“This is a group from Mamelodi who have become quite formalised and offer opportunities for members of the local community to get involved in cycling,” he said.

“They promote it as a form of recreation, but also as a way of cheap and beneficial transport.

“After joining them in a ride last year, we have now helped them with entries for the Tshwane Classic, so this is a follow-up and everyone is super excited to be involved again.”

Riding in the Danish colours of red and white, Moller said they would have entries in all the offerings at the Tshwane Classic, including the kiddies’ races which will be held within the grounds of the Voortrekker Monument.

He added that he thought the event would be a “great thing” for the Pretoria sporting calendar.

“These sorts of sports events are giving the cities a good image because they attract investment.

“If you just look at the Cape Town Cycle Tour, people fly in from all over the world, so that is good for the economy, and it’s also a great idea from a lifestyle perspective.”

For more information on the race, go to www.tshwaneclassic.co.za. 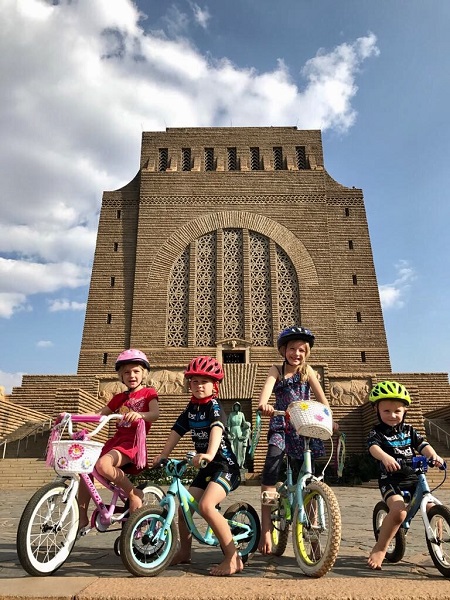 The Danish embassy will ensure an international flavour at the Tshwane Classic, including the kiddies’ races, at the Voortrekker Monument on November 5. Photo: Supplied