Wheadon and Goosen add to tally of squash titles

The 36-year-old Wheadon, from Milnerton in Cape Town, settled a score by overturning a defeat he suffered to Rudi van Niekerk in the Londt Park Open this year with a 3-0 result in the final.

Since the tournament was revived in 2012, the lefthander has dominated the proceedings and added a sixth straight title to his collection on Sunday.

The top eight men were divided into two pools, with Wheadon and Van Niekerk ending comfortably on top to qualify for the final.

Goosen has also been a regular winner of the title and she went through the women’s section unbeaten to be crowned the champion again.

The top four women also played in a round-robin format. Jacqui Ryder and Bianca Brown both took games off Goosen, but got no further than that.

Tournament organiser Sarah O’Grady said they were delighted with how the tournament unfolded after receiving 40 entries.

“We divided the players into three men’s sections and two women’s divisions and we were very happy with the number of competitive matches we had over the weekend,” she said.

“The time allocations ran well, the players marked after their matches and the games were all played in a good spirit.”

Although they did not have a title sponsor, O’Grady said the committee had done much work to ensure an attractive line-up of prizes.

“Besides the entry fees, we did not have a guaranteed cash sponsorship. But I must thank all those who came on board to support the tournament such as Romans Pizza, Sportsworld, Red Bull and Mount Vernon wine.” 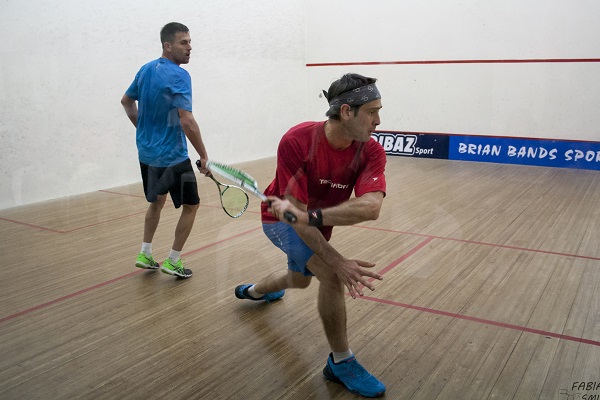 Gary Wheadon stretches for a backhand on his way to defeating Rudi van Niekerk (left) in the final of the NMMU Madibaz Open squash championships in Port Elizabeth at the weekend.  Photo: Fabian Smith