Collegiate, who won last year’s provincial title, will be aiming to become the final provincial qualifiers when the PE Coastal leg of the SPAR Eastern Cape Schoolgirls Hockey Challenge is held at Pearson in Port Elizabeth on Sunday.

So far, four of the five regional qualifiers have been played, with Union High, Kingsridge, Clarendon and York having booked their places in the provincial finals at Woodridge, near Port Elizabeth, on August 12.

A total of 10 teams will meet at Pearson on Sunday to decide the PE Coastal winners, an increase from the eight sides that contested the corresponding tournament last year.

Hockey challenge national director Les Galloway, who will be attending Sunday’s play-offs, said it reflected how the concept had been adopted by the schools in the region.

“The interest and the excitement of the tournament have grown from last year,” she said. “Now we have a situation where the challenge is becoming established on the calendar, creating some continuity.

“More and more schools are becoming aware of the tournaments and want to get involved.”

She added they were looking forward to a day of quality schoolgirls’ hockey.

“This is an exciting region, with Collegiate being one of the top teams after they won the provincial title last year,” said Galloway, who is based in KwaZulu-Natal and initiated the concept in that province seven years ago.

“But you also have a very good side such as Pearson, and then there are a whole lot of other teams who will have a chance to prove themselves.”

Besides giving the schools exposure, Galloway said the challenge also provided an opportunity for individuals to catch the eye.

“This is their chance to make an impression on the selectors as they aim for higher honours.”

The teams for Sunday’s play-offs will be divided into two pools.

Pool A will comprise Pearson, Woodridge, Victoria Park, Pearson Invitational and Nico Malan, while pool B will consist of Collegiate, Westering, Linkside, Alexander Road and Framesby.

The top two teams in each will qualify for the semis, starting at 3pm. The final is scheduled for 4.40pm and matches will be played over 20 minutes. 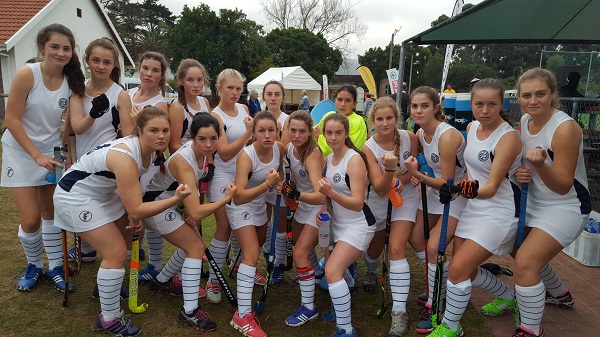 Collegiate will be eyeing another title when the PE Coastal leg of the SPAR Eastern Cape Schoolgirls Hockey Challenge takes place at Pearson in Port Elizabeth on Sunday. Photo: Full Stop Communications