UJ athletes to measure themselves against world best

A number of the University of Johannesburg’s top athletes will be heading to Europe in June to compete against the world’s best in various track and field disciplines.

“Competing in Europe gives our athletes an opportunity to measure themselves against the world’s best and they are not just taking part, they are competitive as they rank among the best,” said UJ athletics head coach, Emmarie Fouché.
“This is a great opportunity for our athletes to represent UJ on a global stage and they have been doing a phenomenal job.”

One of the athletes going overseas is Zarck Visser, who will be looking to make a comeback in the long jump after having battled with injury last season.

Visser had a tibia stress fracture that did not heal properly and he had an operation on his leg in December.

“For me this is a great opportunity following my recovery,” he said. “Long jump is my life and it felt that a part of me had been taken away, but now I am top of the world.”

The long jumper said he would be travelling to Europe on June 4 and was hoping to stay in Europe for the next three months, where he already had four events lined up.

“I’m feeling 100 per cent after the operation, the recovery has been good and I have my confidence back.

“My plan is to use the two meetings in June, in the Netherlands and Germany, to qualify for the World Championships, which take place in London in August,” he said.

Visser won silver at the 2014 Commonwealth Games, as well as securing silver in 2012 and gold in the 2014 African Championships. In 2015 he placed 19th overall at the world championships in Beijing, China.

Other UJ athletes who will be travelling overseas include long jumpers Rushwahl Samaai and Lynique Prinsloo and sprinter Alyssa Conley.

Fouché said it was vital for up and coming athletes to be able to compete in the European competitions and gain exposure on the international stage.

“The challenge is that these opportunities are often expensive, which place them out of reach for many youngsters, who have yet to prove themselves to potential sponsors,” she said.

“It would be wonderful if we could get financial support for some of our younger athletes, as the experience they would gain would only be a positive contribution to their overall sporting career.” 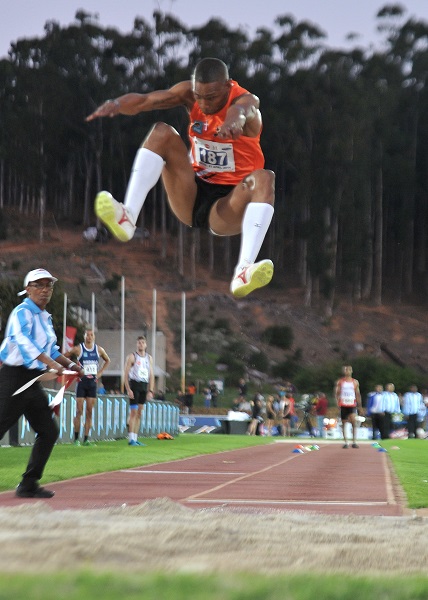 Zarck Visser of UJ on form during a Varsity Athletics meet at the Coetzenburg Stadium in Stellenbosch a few years ago.
Photo: Saspa