University of Johannesburg rugby coach Werner Janse van Rensburg has commended his players for holding their nerve under pressure to qualify for the Varsity Cup semifinals.

With one round left in the first phase of the competition, FNB UJ have sealed their spot in the top four and will play their final league match against Maties on Monday.

The UJ outfit, who lost their first two matches, made sure of reaching the semifinals for the fifth time since 2011 when they defeated Johannesburg rivals Wits 28-23 in a hard encounter this week.

Janse van Rensburg said the mood in the camp was one of “gratitude and enjoyment” following Monday’s victory.

“It was a tough start to the campaign and the pressure was on more than ever before in the build-up to the Wits game,” he said. “So for the guys to pull through was very satisfying.”

Despite their sluggish start to the competition, he said the Varsity Cup generally showed that the top four sides were only decided towards the end of the league phase.

“We knew this year wouldn’t be any different so the motivation was still there to make the top four.

“But for us we had to break it down week by week and as the journey went along, our belief that we could do it started to strengthen.”

Janse van Rensburg said their positive attitude had played a big part in their success.

“That and a willingness to push ourselves to the end helped us get through. A tight scrap like the one against Wits is always determined by your attitude and for us it was the key factor.”

With the semifinals to be played on April 3, UJ now turn their attention to the final league game against Maties in Stellenbosch.

Janse van Rensburg said they would not be changing their preparations.

“We will approach it the same as every Monday, but we know we have a lot to improve on in terms of our basics and in putting together a solid performance,” he said.

“The challenge is massive as Maties are at the peak of their powers, but we are going to give it our best shot.

“We want to keep our momentum and ultimately enjoy the opportunity to play at Danie Craven Stadium.” 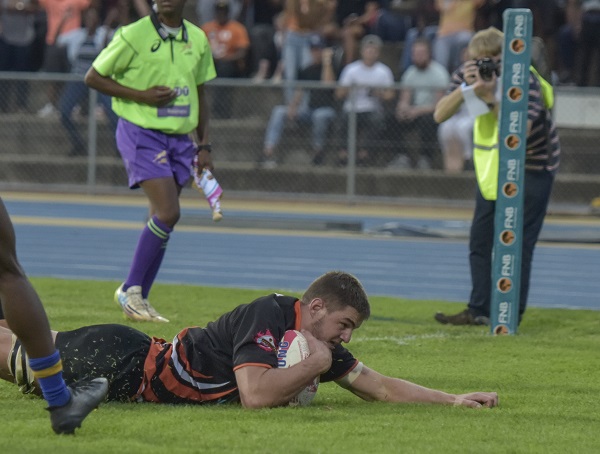 University of Johannesburg player Driaan Bester crosses for a try in their Varsity Cup Rugby match against Wits in Johannesburg on Monday. Photo: Saspa