A high-quality field will again be racing for a lucrative prize purse when the Liberty Winelands Encounter takes place in the Western Cape next month.

Presented in partnership with STANLIB, race organisers have put together an attractive purse of R100 000 for the three-stage mountain bike race, which starts in Stellenbosch on April 21 before moving to boutique race villages at Franschhoek and Wellington.

Paying tribute to the input from the title sponsors, ASG Events chief executive Wynand de Villiers said they felt it was a substantial package which had already attracted some top riders.

“In terms of prize-money, very few events boast this kind of purse so we are thankful to Liberty for making this possible for the competitors,” he said.

“We have had a host of top riders who have entered as a result.”

Among the leading contenders who had entered, he said, was Sweden’s Jennie Stenerhag who, with partner Esther Süss, currently leads the Cape Epic women’s event.

In terms of the split, De Villiers said the purse would be shared equally among the men’s, women’s and mixed categories.

“We live in an equal society, so we believe that is the way to go.”

While De Villiers said there was naturally a focus on attracting top riders, they also acknowledged the importance of providing a race which everyone could enter and enjoy.

“The Winelands Encounter is definitely a race for everyone,” he said.

“You obviously need to be a relatively skilled and experienced rider to complete the event comfortably, but it’s by no means just shaped around the pros.”

He described the race as the fastest growing three-day mountain bike race in the country and felt the overall package was full value.

“I have taken part in a number of three-stage offerings and the Encounter offers the best on all fronts,” said De Villiers.

“The package includes world class venues, the beautiful Winelands scenery and routes that don’t have their equal.”

He added that entries were filling up fast, with the cap set at 250 teams.

“To date we have 220 entries and there is a strong spread across all the categories.” 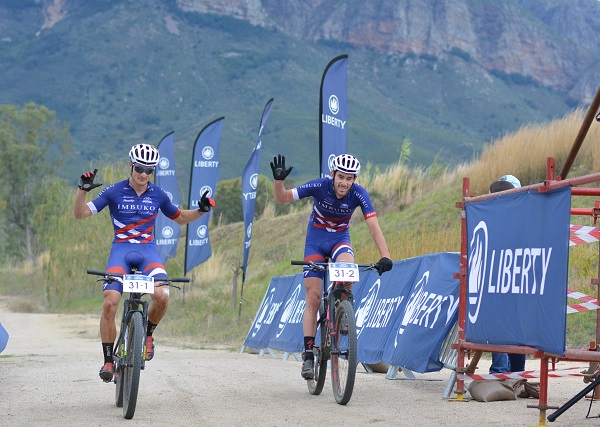 Participants in the Liberty Winelands Encounter, in partnership with STANLIB, will be racing for an attractive overall purse of R100 000. Last year’s winners were Chris Wolhuter (left) and Craig Boyes. Photo: Full Stop Communications