Nelson Mandela Bay may have served up some typically challenging weather, but the metro’s runners turned out in their thousands to tackle the 23rd SPAR Women’s Challenge at Pollok Beach on Saturday.

With Port Elizabeth comedian Gino Fabbri urging them on in his inimitable style, the participants’ spirits remained high as they lined up for the 10km and 5km events respectively.

Not even a gusting easterly wind and rain could dampen their fortitude as they emerged from a variety of sheltering spots for their runs.

The conditions meant a tough finish as the last two kilometres were into the teeth of the wind.

Johannesburg’s Irvette van Zyl, who is hoping to be selected for the Rio Olympics, outlasted her opponents in the 10km feature race to take her second Grand Prix Series victory of the year in 33:28.

She was followed by the Phalula sisters, who, in a display of spirit which typifies the SPAR races, came across the line arm-in-arm. Officially, Lebogang took silver in 34:09 with Diana-Lebo a further second behind.

Van Zyl, who had a baby last year, said she was particularly pleased to have won her first-ever SPAR race in the Windy City.

“The conditions weren’t that good, but I was very happy coming over that line. It was very special.

She said having a child had changed her focus.

“I think I’m more relaxed about my training. I take it as it comes and am not over-stressing as I used to do.

“I just break everything down into small periods, set my goals and then focus on what’s ahead of me.”

While Van Zyl was the talk of the day, plenty of grit and determination was shown across the running spectrum.

In the 5km, Sydenham’s Thuliswa Maka, 25, continued a remarkable run of having competed in every event since she was nine.

“I love this race. I have been running it for 15 years and every year I make the effort to enter.

“The ambience, the people and the vibe is so great that it really helps me and even the rain was nothing,” said Maka.

“I have a good selection of T-shirts from all the colours over the years and next year I will be doing it again.”

Lorraine’s Nikita Drury, who ran the 10km, said it was “an awesome experience”.

“The conditions were pretty tough, especially the last two kilometres, but it is always such a nice race,” said the 24-year-old.

Parkside’s Toegeda Vyver, who completed the 10km in 47 minutes, echoed the thoughts of her 9 000 fellow competitors.

“I would never miss it, whatever the conditions. The spirit of the race is still there.”

Garth Taylor, who performed live to a soaked but enthusiastic audience, shouted “don’t worry about the rain, you’re already wet” as he pointed the microphone to them to complete a line from a well-known hit.

“Women are the glue that keeps the community together,” he said, “and this event is to show what deep respect we have for the women in the community.”

He said it served to introduce women to the sport and a healthy lifestyle at the one end of the scale, while on the other it was a platform for the country’s top runners to compete at the highest level.

Swart confirmed SPAR’s additional contribution to the community, with R150 000 of the proceeds being donated to the Northwood Children’s Hospice and R100 000 to the Association for the Physically Disabled. 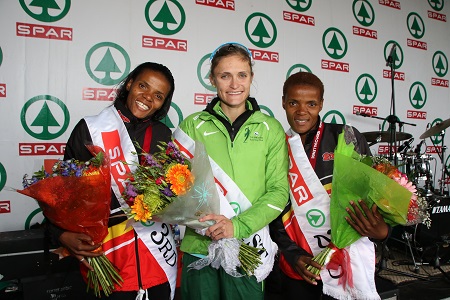