While stage one of the five-day Bestmed Tour of Good Hope on Monday will have the feel of a one-day classic, the first meaningful leader should emerge after the following day’s 37km individual time-trial.

“I expect the revised opening stage to be a tactical affair,” said former pro rider and cycling analyst Johnny Koen.

“The new route is a blessing in disguise for the sprinters, so brace yourself for a classic gallop to the line.”

Koen said the real pattern of the race – which is based at La Paris Estate outside Paarl this year – would however emerge after the second stage, where he expected the likes of Team Telkom’s HB Kruger and Morné van Niekerk and ProTouch’s JC Nel to be in the hunt for yellow.

In the corresponding stage last year, Nel took the overall lead after placing second before relinquishing it the next day.

“It is certainly a long time-trial for a tour of this length,” said Koen.

“At the very least, it will dictate the pattern of the event. But I expect it to determine the meat of the eventual top-ten among the men and women.”

“And then it is all to play for in the mountain top finishes on days three and five,” said Koen, who was looking forward to a humdinger in the women’s race.

Taking control of the tour early on came with its own perils, he warned. “It will certainly provide the new leader’s team with an enormous workload in the remaining three days.”

Apart from the much talked about time-trial, this year’s Tour of Good Hope, which is presented by Rudy Project, includes several mountain passes and two mountain top finishes.

“Although these finishes are imperative to give climbers their shot at the overall title by way of balancing out the result of the TT, it has in the past not had the ultimate effect,” said Koen.

“Two years ago in the women’s race Lise came closest when she flew up Franschhoek Pass on the final stage with Ariane only managing to hold on by a handful of seconds.”

Koen said the way mountainous stages played out was often dependent on the overall situation.

“The GC contenders are usually content to let lower placed riders go on long breakaways to neutralise the race. This often leads to nail-biting finishes as the early aggressors are hunted down.

“Then it comes down to whether the leaders will have enough in reserve on the final ascent to attack, defend or simply to survive.”

While he expected the same four in the women’s race to dominate throughout, Koen picked Kruger (fifth last year), Nel (second last year) and RoadCover’s Bradley Potgieter to stand on the overall men’s podium after 522km of racing. 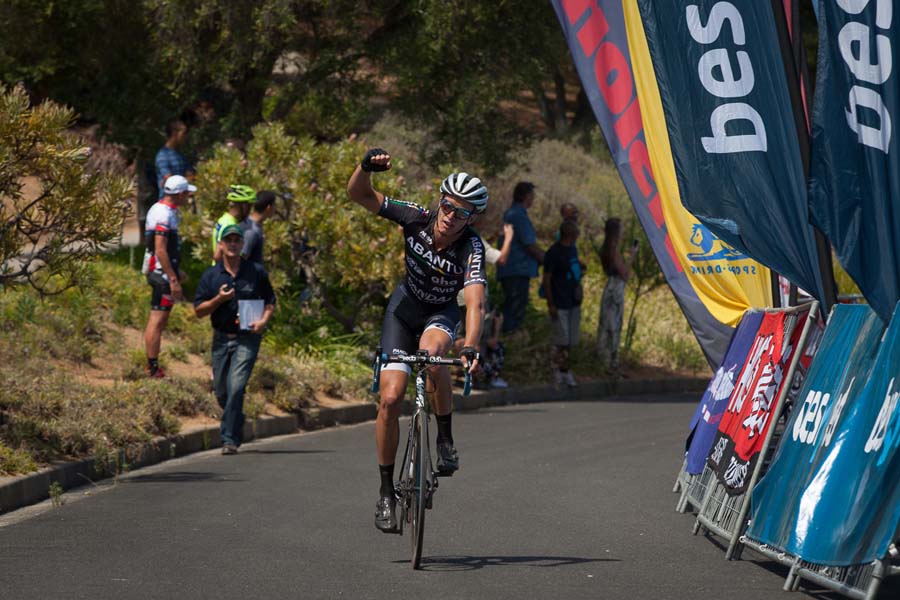 HB Kruger, who will be riding in the colours of Team Telkom this year, won the final stage of last year’s Bestmed Tour of Good Hope at the Taal Monument above Paarl. Photo: Capcha