“The growth in women’s mountain biking was acknowledged by our title sponsor and a decision was taken to create a standalone squad,” said Owen Botha, principal of the Bestmed-Lapierre Factory Team, after today’s announcement.

“We looked at a number of brands, but Lapierre suited our goals and long-term ambitions.”

Botha, who also manages the Bestmed-ASG women’s road team, said they had a long history of supporting mountain bike and road cycling teams in France.

“Loïc Bruni won the downhill world champs on a Lapierre last year and they are also the sponsors of the UCI ProTour team FDJ.”

Botha said he was blessed with riders who had the ability to race both on and off-road and that the mountain bike team was the next logical step.

“As a family activity, mountain biking is also in line with Bestmed’s philosophy of a healthy lifestyle.”

Good2Go, the South African distributors of Lapierre, were looking to invest in young riders as they were the future of the sport, said managing member Craig Munro.

“After being approached by their business manager Annes Britz, we forwarded a sponsorship proposal to Lapierre’s head office in France.

“They monitored the team’s activities for a few months, were happy and agreed to supply the team with mountain bikes for three years.”

Munro said that even after 70 years, Lapierre were constantly moving forward.

“It is a niche product and they are always striving to improve.

“The mountain bike has an electronic rear suspension that works off a cadence and speed sensor, so the rider can concentrate on racing while the computer sorts out the rest.”

He said 10-time world downhill champ Nico Vouilloz was tasked with the research and development aspect of the suspension.

“Our main objective is to create a partnership that showcases the quality and reliability of the brand in South Africa,” said Munro.

“We believe the Bestmed team fit our requirements perfectly and the fact that we have a three-year deal allows us to grow our brand with them.”

Botha said the team’s initial focus would be the national XCO series with marathon racing being introduced from April onwards. 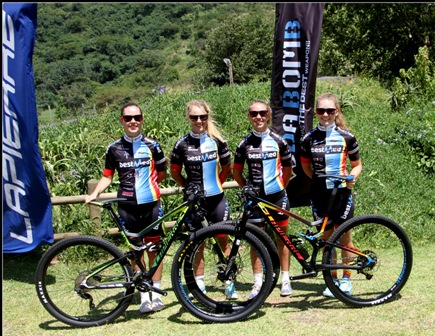