NMMU, which celebrates 10 years of existence this year, is setting a course to become one of the leading rugby-playing tertiary institutions in South Africa.

By putting the right infrastructure in place, the plan is that the Madibaz will become one of the crucial feeder streams for the EP Kings in Nelson Mandela Bay.

To this end, the university is kicking off its campaign by hosting a star-studded Bok Banter gala dinner at the Vodacom NMMU Indoor Sports Centre on September 3 in the run-up to the Rugby World Cup.

The event will see the return of some high profile Springbok alumni to their alma mater, including Gavin Cowley, Hannes Marais, Hennie le Roux, Garth Wright and Paul Treu.

The former greats will share their thoughts on the Boks’ World Cup prospects and a three-course dinner with rugby-loving members of the public. The audience will also be able to bid on signed memorabilia.

All funds raised on the evening will contribute towards the construction of a dedicated rugby clubhouse, which will showcase the institution’s rugby legacy, build team spirit and inspire current and future players.

The anticipated cost of the project is R3 million and Bok Banter will mark the start of the fundraising campaign, which will be spearheaded by former SA scrumhalf Wright.

“The long-term aim is to rally enough people behind the Madibaz team for us to become a sustainable force in Varsity Cup and through these efforts contribute to the rugby programmes of the EP Kings,” said Madibaz deputy director of sport Petrus Boukes.

“NMMU is ideally placed to play a leading role in the development of young players once they have left school.”

Boukes said it was vital to mobilise alumni and former Madibaz players to rally together and leave a legacy.

“The fact that busy people like Garth and other alumni have committed themselves to this cause is indicative of the appreciation they have towards the institution that helped give them a head start in their professional and sporting careers.

“Their involvement must serve as an inspiration to other alumni to also get involved with this project.”

According to the university’s director of alumni relations, Paul Geswindt, NMMU and its predecessors UPE and PE Technikon have conferred qualifications on around 100 000 individuals to date.

“Alumni form the university’s only permanent stakeholder group and their success contributes to the success of the institution,” said Geswindt.

“Who better to be ambassadors of a university than its graduates? Alumni can give back to their alma mater in many ways, including sharing their expertise, networks, promoting the university and donating in cash and kind.”

He called on former students to book their seats for the experience of a lifetime, and enjoy the opportunity to reconnect with old friends, meet a few Bok legends and contribute to a worthy project that will benefit NMMU in the long run.

“We hope that the combination of alumni rugby experts, a great topic of interest (the Rugby World Cup), a celebratory anniversary year for NMMU, and a special social and networking occasion will excite many alumni to support the event.”

Alternatively, contact Cliff Hall on 082 781 0544 or info@indlovumarketing.co.za for sponsorship opportunities. 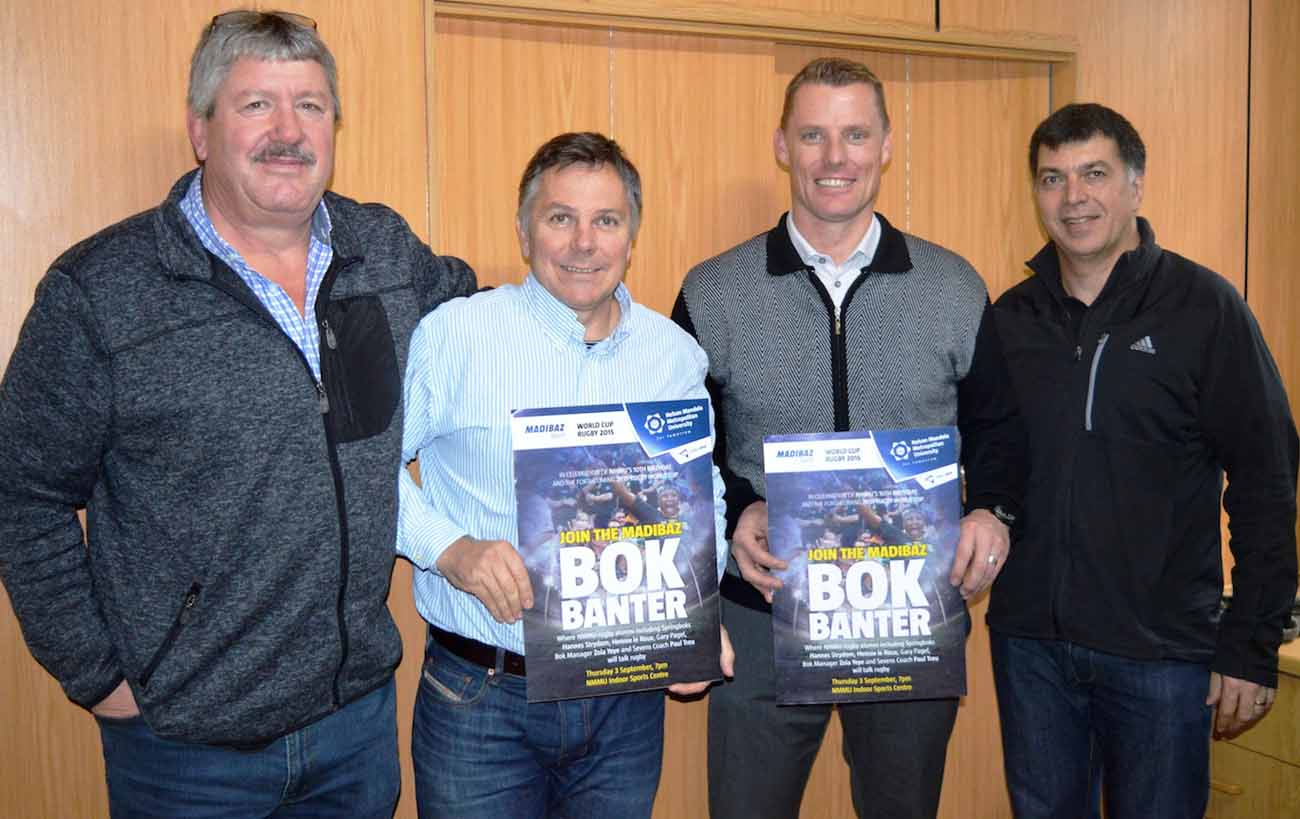