A determined Bestmed-Shukuma Madibaz cycling team held many of the larger squads at bay to take the silver medal in the team classification at the University Sport South Africa competition in Stellenbosch last week.

The Western Cape institutions dominated the national student championship, with hosts Maties claiming the overall victory and the University of Cape Town rounding out the podium.

Madibaz team captain Marinus Prinsloo and teammate Christian van Aardt did NMMU proud with their selection to the national squad for the world student games.

Despite being the 2014 titleholders, the NMMU riders were at a numerical disadvantage from the start of the three-day road tour.

“We went into the tour as defending champions and never would have thought that we would get the results we did with only four riders compared to the other universities who had up to seven,” said Prinsloo, whose young team also included Matthew Hayter, Van Aardt and Shane Kemp.

“Our goal was to try and podium but we knew it would be a tall order as we were racing teams double our size and with much more racing experience,” he said.

Prinsloo said both Maties and UCT had fielded full squads comprising a number of riders who also cycled for professional teams.

The tour kicked off with a 70km road stage on the Lady Loch circuit in Wellington.

The Madibaz were looking good until the third lap, when Van Aardt crashed heavily as he crossed the line at the first sprint prime.

“It was at this point that I once again realised why I love student champs so much, as the entire bunch then sat up and waited for Christiaan to return,” said Prinsloo.

The NMMU team recovered well to go into the afternoon’s individual time-trial in first place in the team classification.

“The guys showed guts as the entire team rode brilliant times despite our smaller team,” he said.

Unfortunately, the Madibaz slipped into second after stage two, as the 120km queen stage loomed ahead the following day.

“This was a very intense race with multiple breakaway attempts and flying attacks from the likes of Maties who were in the first team position but Varsity College had the yellow jersey.”

Van Aardt was a strong contender for all the hotspots and placed third in the final sprint to the line.

“Unfortunately Shane did not finish the stage but the contribution he made was immeasurable and he will play a big role in the future of the team,” said Prinsloo.

He said day three proved to be even tougher on the NMMU camp with the riders feeling physically drained from the two previous days of hard racing.

“Despite being tired, the spirits were high and the guys wanted to race,” said Prinsloo.

The morning began with the fourth stage, a criterium race through the streets of Stellenbosch, which was followed by a final hill climb in the afternoon.

“The pressure was on with the hill climb up to the hydro station as we wanted to go home with the silver medal,” he said.

“I was so proud to hear that we took back over 40 seconds in the final stage.” 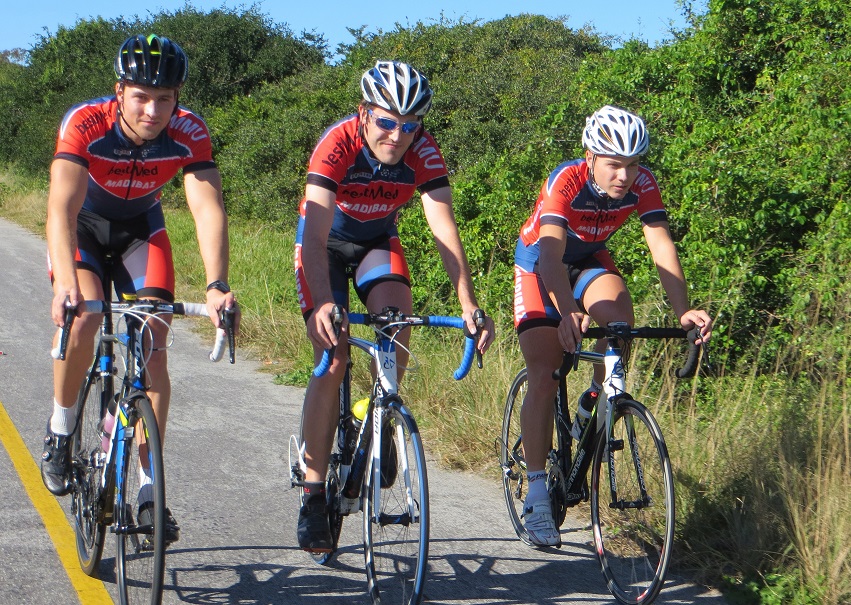 Issued by: Coetzee Gouws
On behlaf of: Madibaz Sport
MENU