The Port Elizabeth-based NMMU Madibaz will face stiff opposition when they take on South Africa’s top rugby-playing institutions at the University Sport South Africa rugby sevens tournament in George on December 1 and 2.

This will be the fifth consecutive year that the NMMU George Campus will play host to the national student tournament and more than 24 teams are slated to take part.

The tournament kicks off on Monday with the pool phase, followed by the knockout portion and finals on the Tuesday.

According to Madibaz rugby sevens coach Ryan le Roux their biggest challenge would come from reigning Cup champions the University of Pretoria (Tuks), and North West University (Pukke), who beat Madibaz George in the final of the Plate competition.

Le Roux said his men were quietly confident ahead of the competition.

“We have had a good nine weeks of training and are looking forward to knocking off some of the bigger varsity teams.”

He said the Madibaz’s primary goal was to secure a top-10 finish to qualify for the Varsity Sevens tournament.

They finished seventh overall at the 2013 Ussa championship and eighth in the Varsity Sevens tournament.

“For our George side, it’s always great playing at home. They will also not need to travel, which is always an advantage,” said Le Roux. 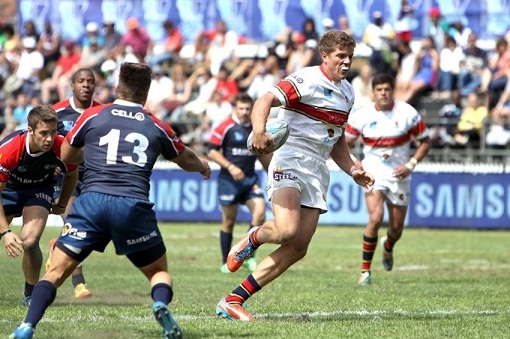 The Madibaz, seen here in action against Tuks at the Varsity Sevens tournament, will compete in the University Sport South Africa rugby sevens tournament at the NMMU George Campus on December 1 and 2. Photo: Varsity Sport