Glasgow silver medallist and African long-jump champion Visser leapt to a second straight victory in the Sportsman of the Year category, while South African hockey player Coston scooped both the Sportswoman and Student-Athlete of the Year awards.

The national, student and Varsity Athletics champion is currently ranked seventh in the world with a season’s best leap of 8.31m.

Coston’s achievements both on and off the field were what set her apart and earned her the double awards.

With 110 national caps, she was a vital link in the South African team that took gold at the World Cup-qualifying Africa Cup in Kenya and finished second at the Investec Cup in London.

Coston also represented her country at the Commonwealth Games in Scotland and the Hockey World Cup in the Netherlands.

Despite a punishing international schedule, the fifth-year chiropractic student maintained a solid academic performance with a 73 per cent average and 18 distinctions over the course of her studies.

Master of ceremonies and UJFM sports editor Andrew Hope said the finalists’ achievements were made even more remarkable by the fact that every one was a full-time student.

“Essentially just to be a nominee requires an exceptional amount of dedication and commitment from these students not only to their sport, but also to their studies and, from that, their future.” 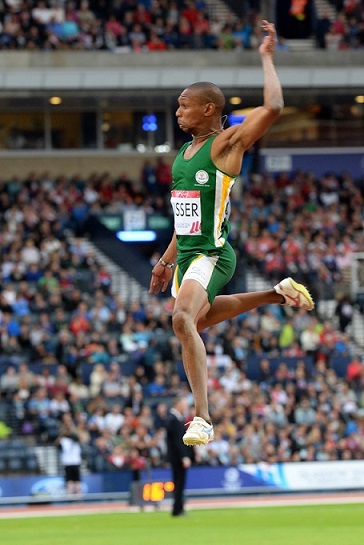 Commonwealth Games silver medallist and African long-jump champion Zarck Visser leapt to a second straight victory in the Sportsman of the Year category at the University of Johannesburg Sports Awards on Thursday night. Photo: Wessel Oosthuizen/Saspa