All-rounder HB Kruger put both his climbing and sprinting abilities to the test as he notched up his maiden win in the 106km Bestmed Satellite Classic, presented by ASG, on Saturday.

The Bonitas rider put in a big effort on a tough climb in the closing kilometres along Hartbeeshoek Road and was first into the last turn at Saloon Route 66 to cross the finish line in a winning time of 2:31:08.

Costa Seibeb of the MTN-Qhubeka feeder team was second, with Sean-Nick Bester of Westvaal-BMC third.

Kruger said the Satellite Classic was one of the few races that suited his strengths, but that his team had gone into the race without a designated leader.

“It’s more about who’s got the legs at the finish,” he said.

“I told the guys I was feeling good and they brought back the last guy for me and luckily I had the legs to pull off the win.”

The racing started at a brisk pace under cloudless skies and perfect conditions, with the bunch quickly nullifying any early attacks.

A 12-man breakaway split from the peloton just before the sprint prime at the 40km mark, which was won by Meron Teshome of the MTN-Qhubeka feeder team.

Europcar’s Ian Pienaar bridged to Teshome and the two worked together to open up a gap of more than 30 seconds on the chasing bunch.

The pair held their lead over the next 30km until they were finally caught on the gruelling Hekpoort climb.

African road champion Tesfom Okbamariam conquered the 4km ascent, which features an average gradient of seven per cent, to claim the king of the mountains title for MTN-Qhubeka.

The climb also saw the lead bunch reeled in by the peloton, with the groups joining and splitting several times after going over the top.

His solo effort lasted almost 20km as the chasers reeled him in with about 2km to go.

With a full-strength Bonitas squad in the mix, Kruger said they had had a number of cards to play.

“Herman (Fouché) was in a break right before the finish but he said he didn’t have the legs, so he and Dylan Girdlestone committed fully to me,” said Kruger.

“Without them I wouldn’t have been able to do it.”

The victory marks some good late-season form for the 23-year-old, who won the recent Engen Cycle in the City criterium race in his home base of Pretoria. He was also instrumental in Fouché’s victory at the Bestmed Campus2Campus SuperClassic.

“With the fast, intense racing we’ve been doing with the GoWest and Engen series, the speed is definitely picking up – not only mine, but my competitors as well,” he laughed.

Following a few top-five finishes while racing in France a couple of months ago, Kruger said he was feeling positive about his form.

“So far I’m happy but I wouldn’t mind inching towards a few more wins and finishing the season off on a high note.”

In the women’s race, Time Freight-VeloLife’s Lise Olivier claimed the queen of the mountains title and the overall victory in 2:53:09. 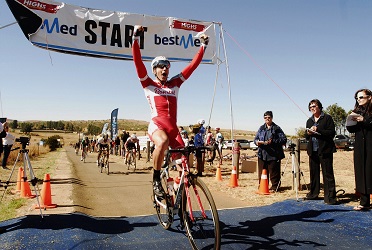 HB Kruger (Bonitas) races over the line at the Bestmed Satellite Classic which took place on Saturday near Hartbeespoort. Photo: Jetline Action Photo