In the wake of a successful Varsity Football campaign, University of Johannesburg coach Bradley Carnell cautioned against overloading student footballers after the first-time finalists failed to qualify for next year’s tournament.

Despite the promising debut, UJ will not be returning for the 2015 edition as they did not finish in the top three of the University Sport South Africa Gauteng league, which would have set them up for the national qualifying tournament in Durban in December.

Carnell said the format needed to be looked at, as all the teams who did well in Varsity Football had had an uphill battle in the concurrent Ussa champs.

He said playing back-to-back fixtures for the two competitions on Monday and Tuesday nights had taken their toll on his men.

“If you look at the top four teams in this year’s Varsity Football, NWU-Mafikeng and UJ have not qualified, and the winners Tuks only succeeded by virtue of a third and fourth place play-off, which they won on penalties.”

UJ were an unknown quantity and rank outsiders as they started their inaugural Varsity Football campaign but surprised everyone by not dropping a single match in their march to the finals.

Although the newcomers missed a fairy-tale ending with a 1-0 loss to defending champions Tuks, captain Grant Bruchhausen did the institution proud by scooping the Player of the Series title.

On another positive note, Carnell said he had not been surprised at his students’ Varsity Football success, as he knew the capabilities of his men.

“It was just a question of showing what we had at the right time. Although I thought we were really labouring in the last three weeks, we fortunately had good momentum early on to carry us through the latter stages.”

The former Bafana Bafana defender said Bruchhausen’s award was well deserved as he did sterling job in defence.

“But I don’t really think it was only certain individuals that shone; it was a collective effort that was able to keep us going. If you have a look at how many different players scored goals, it shows we had the depth and diversity as well as the hunger from everyone on board.”

Carnell said having a plan and direction, irrespective of the opposition they faced, as well as good preparation, had been key in going all the way.

He said the huge turnout by UJ fans had also played a critical role in their campaign.

“I never for one second thought that we would get the support we did, as we were going into the unknown and so were the fans.

“The men played attacking football with passion, which is something all football lovers want to see.

“The final was phenomenal and we were very spoilt by all involved in making the students look and feel like pros for a few weeks.

“Having a full home stadium was awesome. It would have been perfect – except for the outcome of the match!”

Carnell said the success of their campaign would hopefully translate into building a more sustainable structure for the future.

“The first step was getting someone like myself involved two years ago, so silently we’ve all been working hard with the limited resources we have to take UJ football forward.”

He said they had already seen a steady increase in the quality of the footballer the university could attract and the existing players had also developed “very nicely”.

“I believe in ‘doing the doing first’ and proving from a technical point of view that we are on the right track. This always makes life easier when we take our plans into the boardroom.”

Carnell said their rivals Tuks had undoubtedly had a big advantage in their association with the AmaTuks pro set-up.

“The structure alone plus the pool of players who are on the cusp or already involved with the PSL team brings huge stability to any team in a lower rank.

“We’d all love a platform at the highest level but in building a house your foundations must be done right or it will collapse in time.”

He said their aim for now was simply to do the best they could and build up slowly to where they want to be.

“I want to work at the best possible level at all times. Where I am in my career at the moment, this is the best level currently, but I’m hungry for more and hopefully UJ is also slowly developing this hunger to see where we can go.”

With UJ already active in the SAB League, which overlapped the Varsity Football tournament by a week, Carnell said his players had earned a break.

“In the last year and a half we have played more than 75 games, as all our leagues overlap each other, with little holiday time in between.

“So it’s a big strain on the players, who are students first, then footballers.

“The pressure of studies and sport should not be underestimated. I’ve seen what the students go through and I really respect their efforts in accommodating both.

But we love what we do and I know they will pull through as they love playing football.” 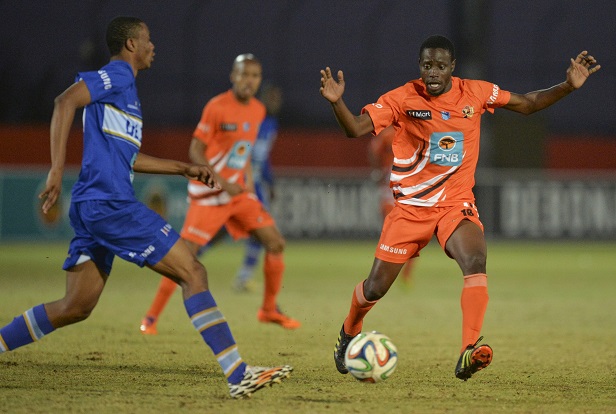 The University of Johannesburg’s Pontsho Nyathi (right) in action against the University of Limpopo during this year’s Varsity Football competition. Despite making it through to the finals against North-West University, UJ have not qualified for next year’s tournament. Photo: Saspa