Mecer Madibaz striker Malgraff is the youngest member of the national hockey team and one of only two students in the side. This year, he received international call-ups for the Sultan Azlan Shah Cup in Malaysia, Hockey World Cup in Holland and Commonwealth Games in Scotland. Malgraff also played in two international test series against Germany and Argentina.

Goalkeeper Vimbela is one of the senior members of the SPAR Madibaz netball team and represented the Proteas at this year’s Commonwealth Games. In 2013, she was named NMMU and Eastern Province netball player of the year and turned out for her country in the Diamond Challenge series on home soil and Fast Five series in New Zealand.

She was also part of the national student team for the International University Sports Federation (FISU) Games.

At the NMMU awards ceremony, Vimbela and her Madibaz teammates earned the additional accolade of team of the year after winning the local EP league for the ninth consecutive year. 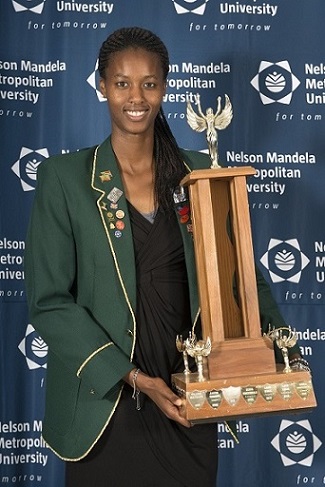