Defending champion Pierre Smith demonstrated a convincing return to form when he made it two in a row at the Pennypinchers Silverstar Mountain Bike Challenge near Krugersdorp on Saturday.

Smith, who missed the greater part of the season due to a torn thigh muscle, proved he was back on song when he outsprinted Guylin van den Berg to retain the 40km title in 1:39:54.

Van den Berg finished two seconds back, with Julius Cobbett a further minute and a half down in 1:41:31.

Smith, who rides in the colours of Team Jeep SA, said the victory had been an important one for him.

“I was out of racing for three or four months after I got injured. So this is the first time I’ve peaked this season and the form appears to be coming along nicely.”

The 22-year-old said he had decided to go hard from the start in pursuit of his title defence in the West Rand race.

“The field was a lot stronger than last year and I had some tough competition. I hammered it a bit and only Guylin was able to stay with me.”

The two set a steady pace over the ensuing kilometres, working together in windy conditions.

After 30km they looked back to see Cobbett gaining on them in third.

“So we put the hammer down again in the closing kilometres and rode away.”

Smith said his route knowledge had ultimately made the difference on the day.

“I knew where I could go hard, especially in the last five kilometres where there are two or three small climbs. The last bit of dirt is also a single-track section.”

The Potchefstroom resident said coming out of that technical section first had given him the edge as he and Van den Berg hit the tar and descended towards the finish at the casino resort.

Nevertheless, he said, the win had still been a happy surprise.

“I’m definitely more of a climber than a sprinter, so it was actually a shock for me to take the sprint.”

Anneke Hanekom turned in another dominating performance in the women’s race after winning the Bestmed Lost City Mountain Bike event three weeks ago. 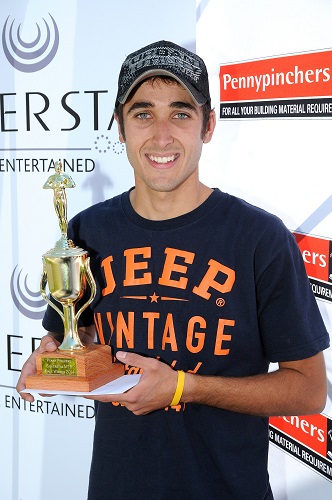