The SPAR Madibaz will have their eyes fixed on a playoff spot when they kick off their second Varsity Netball campaign against UCT in Cape Town on Sunday.

The Port Elizabeth side made it through to the semi-finals of last year’s inaugural tournament before being eliminated by eventual runners-up the University of the Free State (Kovsies).

Madibaz netball manager Theresa le Roux said her new-look squad featured just seven of the 18 players from last season but that the youngsters were determined to reach the top four once more.

“We have a good mixture of youth and experience.”

The side will be captained by second-year education student Arne Rust, who alternates between the wing attack and centre positions.

“Our goalkeeper Zanele Vimbela is also on top form after representing South Africa at the Commonwealth Games, so I’d say she’s going to play a major role in the team,” said Le Roux.

She said their first fixture would set the tone for the competition, which features the top eight netballing institutions in the country.

New coach and former Protea forward Dumisani Chauke will use her extensive playing experience to steer her alma mater through the round-robin portion of the five-week tournament.

“UCT is never an easy game, especially in front of their home crowd, but it’s a game that we can and must win,” said Le Roux.

She said the SPAR Madibaz would host their first home games from September 20 to 22 when they will be playing the in-form Tuks, Maties and newcomers Vaal University of Technology.

“Spectators can look forward to high quality netball as all the national players who are still students will play in this series.”

Le Roux said Tuks in particular would be “loaded with national stars”.

“I’m confident that we can win against VUT. Maties and Tuks will be tough to beat but I would never underestimate our girls.”

The Madibaz impressed at the University Sport South Africa tournament in July where they placed fifth to secure their Varsity Netball slot.

“They’re a young team and nobody expected them to do so well. So, yes, the girls are very positive going into this series and they have a very good coach.”

“The ‘power play’ concept is the most exciting aspect. Each team gets one chance to call a power play during the game.”

During that two-minute period all goals scored count double, resulting in positive and high-energy play. “It’s very technical and crucial for coaches to call it at the right time,” said Le Roux.

The SPAR Madibaz start their home campaign against VUT at the NMMU South Campus courts at 3.15pm on Saturday, September 20. They play Maties at 5.15pm the next day and Tuks at 7pm on the Monday. 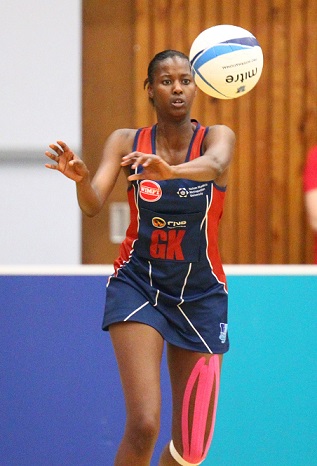