Striker Cloudius Ray Sagandira returns to the Varsity Football spotlight this week to help ramp up the NMMU Madibaz attack ahead of their do-or-die encounter with Tuks in Pretoria on Monday night.

NMMU Madibaz head coach Graeme Harrison said Sagandira would be hungry to score and put in a good performance in the final round-robin match of the tournament.

“He’s a gritty player with an excellent work rate and a never-say-die attitude.”

Harrison said those characteristics would add great value to the team as they aimed to secure their spot in the semi-final round.

The Madibaz and Tuks both have 10 points after six games but the team from Port Elizabeth is ahead on goal difference. The Madibaz are currently third on the log with everything to play for.

“Tuks will be a tough opponent; they’re a good team that play hard, running and direct football. The game will be physical as they will also be desperate for the points.”

Harrison said his men had been working hard on rectifying their mistakes from the previous game and would apply themselves with tenacity and intensity.

“We have one thing in mind and that is to win the game – nothing else. We are determined to fight all the way and go all out to ensure that we achieve the maximum points.”

He said his forwards had been working hard on being clinical in front of goal.

“Although we’ve scored seven goals in our last two games, I feel this is an area where we have to be consistent so that we can put Tuks under pressure.”

Harrison thanked all the local fans for coming out en masse to support the team in their last home game, which lifted them to a 3-0 victory over Limpopo.

“The supporters were awesome. It was much appreciated by all in the Madibaz team.” 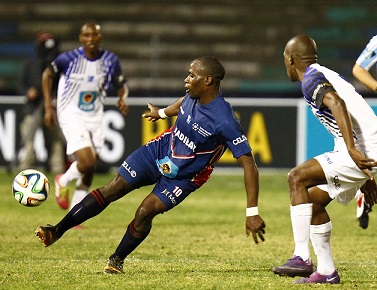 Striker Cloudius Ray Sagandira is set to ramp up the NMMU Madibaz attack ahead of their do-or-die Varsity Football encounter with Tuks in Pretoria on Monday night. Photo: Michael Sheehan/Saspa