The NMMU Madibaz made a dramatic exit from the Varsity Football tournament when they suffered a 4-0 loss at the hands of Tuks in Pretoria on Monday night.

Head coach Graeme Harrison said his team had put up a brave fight but that it had not been good enough to secure their place in the semifinals.

“It was very disappointing but we tried our best and I’m proud of the boys.”

Harrison said his team had been under pressure from the get-go with Tuks opening the scoring in the 11th minute.

“We were always going to be under the pump after conceding two early goals. And being 3-0 down at halftime was certainly going to be an uphill battle for us.”

He said his team had been forced to go on the attack in an attempt to even the score but, despite a few good opportunities, things had not gone their way.

In the other deciding fixture, Kovsies’ 1-1 draw against Pukke helped to push the Madibaz out of the top four into fifth position on the log.

“We were going for the win because we didn’t want to depend on other results to get us through,” said Harrison.

He said it was frustrating that their nemeses Tuks were once again the source of the Madibaz’s demise after losing to the Pretoria side in last year’s final.

“We knew that if we could just have gotten a draw we could have moved on and left them behind. But that was obviously not to be.”

Harrison said inconsistency throughout the seven-week competition was what ultimately cost them their shot at the title.

“It’s been a bit of a yo-yo season for us – things would be on the up and then all of a sudden we’d slip. So that’s something for us to work on rectifying.”

The Madibaz rallied in the latter part of the tournament, securing solid victories over Kovsies and the University of Limpopo in the last two games.

Despite their setback, Harrison said it was by no means the end of the road for the Madibaz.

“We’ll be back. It’s a relatively young team and we’re still in the rebuilding phase.”

Himself a recent addition to the Port Elizabeth-based setup, Harrison said they would look at identifying areas for improvement and beefing up the team ahead of next season.

“We still have the local Pefa league to campaign in. We’re also looking forward to going to the Ussa nationals in Durban during the first week of December, where we’ll have to qualify for the 2015 Varsity Football tournament.”

Harrison also had a final word of appreciation for the Madibaz’s fans.

“I just want to apologise to our supporters for letting them down. But I also want to say thank you for their continued support and backing us all the way.”

Madibaz football manager Mark Tommy said the standard of Varsity Football, now in its second year, had improved tremendously, with some very good teams participating in the competition.

“Debutants the University of Johannesburg raised the bar and Kovsies also gave a good account of themselves.

“We are however proud of the progress our team has made and will now focus on winning the Pefa league and of course qualifying for next year’s tournament.”

Tommy said the university would work on its recruitment strategy to increase the depth of student footballing talent at NMMU. 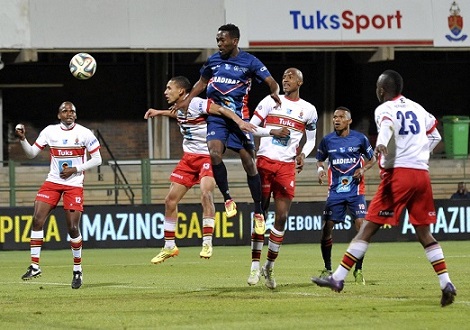