NMMU Madibaz head coach Graeme Harrison has announced an unchanged line-up for their final home game of the Varsity Football tournament against the University of Limpopo in Port Elizabeth on Monday night.

Harrison said he had decided to stick with a winning formula following an emphatic 4-0 victory over Kovsies at Shimla Park in Bloemfontein this week.

“Preparations have been going well. The team spirit and morale is at an all-time high.”

But, he said, he had cautioned his players against over-confidence as they approached the end of the round-robin section.

“I told them that we have to keep our feet on the ground, take it game by game and remain focused on our objective, which is to reach the semi-final.”

To this end, Harrison said his squad had been focused on tightening up various aspects of their game.

“We’ve been working hard on being more effective with our ball possession and more penetrative when we are attacking.”

He said the Madibaz had also been concentrating on perfecting their attacking variations.

Young striker Simamkele Thobi, who joined the starting line-up for the first time in Bloemfontein, will be hoping to repeat his debut goal, while seasoned counterpart Lukhanyo Rasmeni will add his experience to the forward line-up.

Captain Kurt Duff will once again be the lynchpin at the centre-midfield position, while prolific goal-scorer Kieran will start on the bench.

Although their opposition currently lie second from the bottom of the log, Harrison said they were not to be discounted.

“Limpopo will be a tough nut to crack. They showed in their last game against UWC, which ended in a draw, that they are a team that cannot be taken lightly.”

He said his side would have to be at their best if they were to beat their northern opponents.

“They’ll play for pride and honour, which will not make our task any easier.

“But we are determined. We will be fighting hard and going all out for the three points on offer.”

Harrison appealed to local supporters to throw their weight behind the team.

“We want to make you proud.” 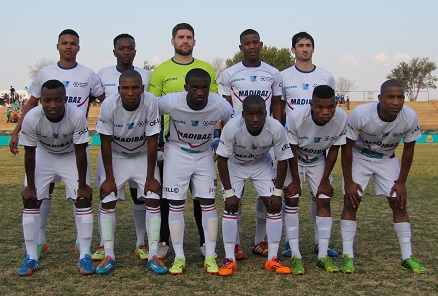 The NMMU Madibaz have announced an unchanged line-up for their final home game of the Varsity Football tournament against the University of Limpopo in Port Elizabeth on Monday night. Photo: Van Zyl Naude