The NMMU Madibaz are determined to turn their fortunes around in their fifth-round Varsity Football fixture against the University of the Free State at Shimla Park in Bloemfontein on Monday night.

Madibaz head coach Graeme Harrison said his team were slightly bruised following their 2-1 home ground loss to the University of the Western Cape, but were intent on recording their first away win of the tournament.

Harrison said the players had been working hard to rectify the mistakes of the previous game ahead of the Kovsies clash.

“Defensively we’ve been a bit disappointing but we’ve identified the areas where we need to improve,” said Harrison.

“A good defence goes a long way in winning matches but scoring is the ultimate, hence we have also been working hard on being more clinical in front of goal.”

The Madibaz will be without the services of striker Cloudius Sagandira, who was red-carded in the UWC clash.

He will be replaced by fellow striker Simamkele Thobi, who returns from injury to make his Varsity Football debut.

“He’ll be hungry to put in a good performance and will want to impress and score,” said Harrison.

“We’ll be relying on Lukhanyo’s experience. After scoring a goal last week, he’ll want to continue in that vein and his confidence is high,” he said.

Also making his first appearance in the nine-week tournament will be wide attacker Olwethu Ngako, whom Harrison described as “a gutsy player with plenty of pace”.

On-form central midfielder Kieran Koert has been sidelined with a hamstring injury, leaving it to his replacement Karabo Motlhabi to create scoring opportunities for the frontline players.

At the back, Harrison has called up Onela Beqezi to support the forwards and offer more stability in defence.

“Kovsies will be another tough assignment. They are another hard-running, competitive team, so we will have our work cut out for us on Monday.”

The Port Elizabeth-based outfit currently occupy sixth place in the standings and will have everything to play for in the remaining three games of the round-robin section.

“We’ll be giving it our all and will fight hard to get the desired result,” said Harrison 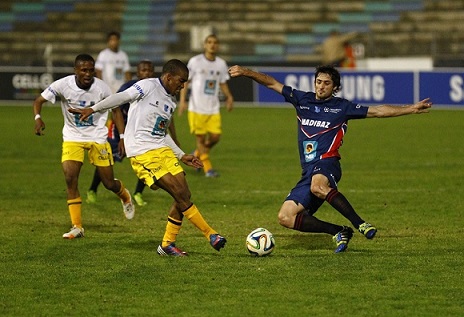 NMMU Madibaz captain Kurt Duff (right), seen here in action against the University of the Western Cape, will once again lead his squad against Kovsies in Bloemfontein on Monday night. Photo: Michael Sheehan/Saspa