The NMMU Madibaz played themselves back into contention in the Varsity Football tournament when they gave the University of the Free State a 4-0 drubbing in Bloemfontein on Monday night.

The result put the Port Elizabeth-based team into fourth spot overall with just two games remaining in the round-robin section.

Although visibly delighted with his team’s performance, Madibaz head coach Graeme Harrison said their campaign was far from over.

“Overall it was a fantastic performance from all the players. I’m very proud and very happy, but we still need to keep our feet on the ground.

“We’re not there yet and need to push hard in the last two games to secure a semi-final position.”

Harrison said their attacking strategy had paid off, with the Madibaz going on the offensive from the first whistle.

“It was a do or die affair for us and we knew we had to get the result against Kovsies. The guys really showed what they’re capable of.”

Striker Simamkele Thobi opened the scoring for the visitors midway through the first half to give them a 1-0 lead going into the break.

“Early in the second half we really caught them napping with a second goal, which was a brilliant effort by Lukhanyo Rasmeni.”

In another solid tactical move, Harrison’s decision to bring impact player Kieran Koert off the bench soon yielded results as Koert scored from a powerful volley in the 78th minute.

“By then I thought the game should be sealed but our captain Kurt Duff put the final nail in their coffin with a successful header in the dying minutes.”

Duff earned the FNB Man of the Match award for his efforts, while Koert was named Samsung Super Striker.

The result brings the Madibaz’s tournament tally to two wins, two losses and a draw.

“We’re very happy that we kept a clean sheet – it was a first for us, not conceding any goals. It shows the guys were concentrating and they stuck to the plan.”

Going forward, Harrison said their form was still a work in progress and that his squad would be taking it one game at a time.

“Kovsies did sneak in once or twice so it’s just a case of tightening up at the back and continuing to create scoring chances and converting them into goals.”

The Madibaz will face the University of Limpopo in their final home game of the round-robin section.

“Limpopo are currently languishing towards the bottom of the log, so they will probably be coming here to play for pride,” he said.

“We’ve still got our work cut out for us and we won’t be underestimating them. But we’re going to go all out for the three points to secure our top-four position.”

Harrison called on local fans to come down in their droves and spur the team on to victory.

“We’re looking forward to playing in front of our home crowd again – their support has been brilliant.”

The match kicks off at 7pm on Monday at the Madibaz Stadium on the NMMU South Campus. 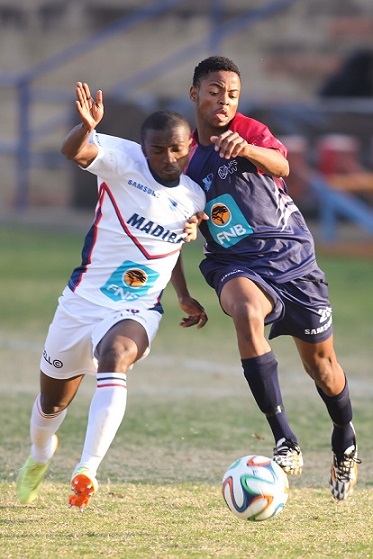 The NMMU Madibaz played themselves back into contention in the Varsity Football tournament when they gave the University of the Free State a 4-0 drubbing in Bloemfontein on Monday night. Photo: Van Zyl Naude