SPAR Eastern Cape put the spotlight on disability matters with the launch of the annual Wheelchair Wednesday initiative at the NMMU Indoor Sport Centre in Port Elizabeth on Wednesday.

The retailer kicked off its five-week campaign with the donation of 20 wheelchairs to the Nelson Mandela Bay Association for Persons with Physical Disabilities.

Speaking at the launch, SPAR Eastern Cape marketing manager Abri Swart said the initiative aimed to raise corporate sponsorship for more than a hundred wheelchairs by the end of July.

Every Wednesday, representatives from the participating companies will also spend four hours in a wheelchair to better understand the accessibility challenges faced by people with disabilities on a daily basis.

“We are really passionate about caring for our community and Wheelchair Wednesday, which raises awareness for people with disabilities, truly epitomizes that aspect,” said Swart.

“These chairs will eventually be donated to the really needy who have no other means of getting around.”

He said the launch event, which took place during the University Sport South Africa netball tournament, aimed to highlight the contrast between ability and disability.

“As the title sponsor of the Madibaz netball club, we are assisting them in hosting the tournament, which has drawn teams from 34 universities across the country.

“It’s a nice synergy – allowing these young, active women an opportunity to see what the challenges are for those who aren’t able to move about freely.”

Among the local celebrities trying out the chairs were SPAR Madibaz assistant coach Zanele Mdodana and defender Zanele Vimbela, who were selected to represent the SPAR Proteas at the Commonwealth Games later this month.

“By the end of this three-year period, we will have handed out 250 wheelchairs and raised just short of a million rand for our job creation workshops, which we run without government funding.

“It’s been a massive success thanks to SPAR’s involvement and we’re incredibly grateful for their support. We know that they aren’t just doing this to tick the right boxes, they’re doing it because they care and to us that’s a very important factor.”

For more information, find SPAR EC in Action on Facebook or visit www.apdnmb.org.za. 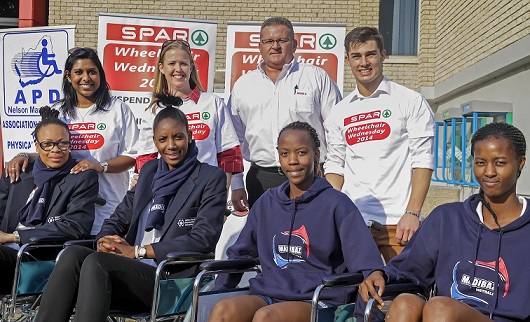 Members of the SPAR Madibaz netball club got a taste of the challenges that disabled people face during the launch of the SPAR Wheelchair Wednesday initiative on July 2. Seated from left are assistant coach Zanele Mdodana, coach Dumisani Chauke, centre Nandipha Jack and defender Zanele Vimbela. With them are (standing from left) the retailer’s Roseann Shadrach, Wendy Westraadt and Abri Swart, and Mr PE runner-up Francois Grobler. Photo: Hugo Studio