The FNB Madibaz will blood their new-look team at the five-day national student rugby championship in Grahamstown next week.

The University Sport South Africa tournament will be the first major national test for coach David Maidza’s squad following the departure of a number of senior players in the wake of the FNB Varsity Cup competition earlier this season.

“We’re in the process of building a team that we can use for the future,” said Maidza, who joined the NMMU-based team at the beginning of the year.

“This is my first year at the Ussa tournament, so I’ll be sounding out how strong the competition is and also looking to see how our new players cope at a higher level.”

The Port Elizabeth side will face off against the country’s top seven rugby-playing institutions – including defending champions the University of Johannesburg – in the A-section of the tournament.

“All of the teams will be in with a shout. Some of the universities don’t send their strongest teams but I”m sure Tukkies, Maties and Pukke will be ones to watch.’

The Madibaz are yet to inscribe their name on the trophy after finishing sixth overall last year. They put in a strong showing at this year’s Varsity Cup, going down by a single point to NWU-Pukke in the semifinals.

The team was forced to regroup in the aftermath of the competition when a number of key players were taken up into various professional outfits.

Maidza said his restructured side had had a stop-start local season so far but was confident that the squad would step up and be ready for their first Ussa fixture against the University of Pretoria.

“Our Eastern Province Grand Challenge season hasn’t gone as smoothly as I had anticipated but, with losing eleven players after Varsity Cup, it was always going to be a tough ask for us.”

Of the nine matches played to date, the Madibaz have won six, drawn one and lost two. They are currently second in the standings behind log leaders Despatch.

He commended new captain Jody Reyneke, wing Tythan Adams and centre Andile Jho, among others, for their fortitude in remaining with the team and continuing to play throughout the long season.

“They have had to keep on playing since February. They have been the heartbeat of the team and true professionals.”

Maidza added that new faces such as scrumhalf Ivan Ludick and loose forwards Oyama Ngxakela and Matthew Tweddle had also acquitted themselves well in the club games. 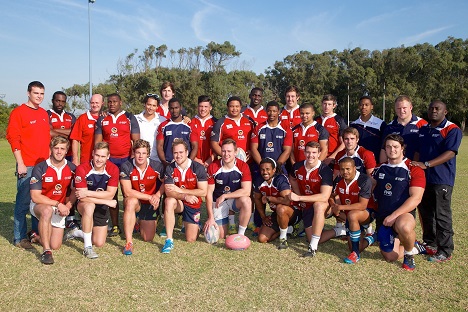