The Mecer Madibaz men’s hockey side will field a full-strength attack that includes Protea player Natius Malgraff when they take on South Africa’s best during the University Sport South Africa tournament in Pretoria from June 30.

The NMMU squad will compete against the seven top hockey-playing universities in the A-section of the five-day competition, which is hosted by Tuks.

Malgraff, who recently returned from the FIH World Cup in the Netherlands, has also just been selected to represent Team South Africa at the Commonwealth Games in Scotland at the end of August.

According to Madibaz hockey coach Cheslyn Gie, the last NMMU players to represent SA at the Commonwealth Games were Jody Paul, John Paul and Clyde Abrahams.

Gie said the university was extremely proud of Malgraff’s achievements in gaining selection to such major tournaments this year.

“Natius is a very humble and respectful person and it’s great to see his talent being rewarded in this manner.”

Malgraff said he was excited to be representing his country once more after a phenomenal world cup experience.

“Everybody has been talking about how awesome this event is, so I’m looking forward to making some wonderful memories.”

The Madibaz striker remained grounded however about his role in the national university competition, which is SA’s third biggest hockey tournament after the senior Inter-Provincial Tournament and Varsity Hockey.

“My job is to score goals and help the team win games but I’m still a junior in the team, so I’ll enjoy that title for now.”

The 21-year-old said the Ussa tournament was the major goal for the season following a disappointing result in the Varsity Hockey competition.

“We had a few setbacks during Varsity Hockey, where I feel we could have done so much better than sixth position. But with this tournament being our main focus, a top-four result is my expectation!”

Gie seconded his statement, saying that both the men’s and women’s teams had the potential to make it through to the play-off rounds, after finishing seventh overall in their respective categories last year.

Both sides will face off against the Maties in the first of their pool games but will not come up against defending men’s and women’s champions UJ and Tuks until the play-offs.

“In the men’s pool, Maties and UKZN are ranked higher than us and are rated as the favourites, while Maties and Pukke are the major challengers for our women,” said Gie.

He said his Madibaz men would be further strengthened by the presence of forwards Dalan Phillips and Chad Cairncross.

“Dalan and Chad couldn’t represent us in 2013 as they were part of the SA student hockey team that participated in the World University Games in Russia. The two of them are available to us this year and will make a big difference to our team’s performance.” 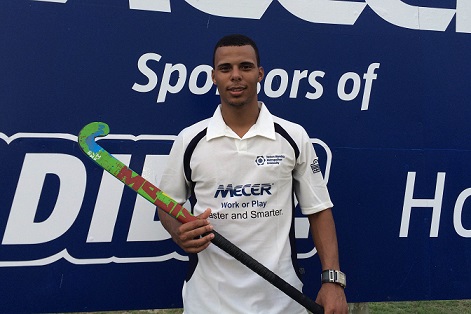 Mecer Madibaz striker and Protea player Natius Malgraff will be a key member of the NMMU squad that is set to take on South Africa’s top hockey-playing universities during the Ussa hockey tournament, which starts in Pretoria on June 30. Malgraff was also recently selected to represent South Africa at the Commonwealth Games in Glasgow in August. Photo: Supplied