The Bestmed-Shukuma Madibaz cycling team have their sights set on the top step of the podium at the three-day University Sport South Africa cycling championship, which starts in Pretoria on July 1.

The Port Elizabeth-based riders, who finished second overall on home soil last year, will be aiming to dethrone the hosts and defending champions, the University of Pretoria, in the team classification.

The yellow jersey will also be up for grabs as Tuks’s titleholder Willie Smit is currently racing for UCI continental team Vini Fantini-Nippo.

Madibaz captain Gerrit Nel said Tuks would once again provide the strongest challenge as they had a number of professional cyclists in their line-up.

“Maties and UCT are also very good; they have quite a few talented riders who’ve performed well lately. They also have big teams, which means they have a number of options in terms of strategies.”

Nel said the in-form Marinus Prinsloo – who finished third behind Smit and Hans-Werner Heuer of Stellenbosch University in 2013 – would be the danger man in the NMMU attack.

“Marinus is currently in the best form of his career. He’s a very good climber and sprinter, with a good track record that also contributes to his capabilities.”

He described his five-man squad as “strong and versatile”, with all-rounder Henno Cronjé providing another string to their bow.

“The team competition classification is determined by the best three riders per stage, therefore it’s important for us to have both of them in the front of the race.

“Any stage victories and exceptional individual performances would be a bonus.”

Nel said specialists Sean Bos and Waldo Gronum would also add their respective strengths to the team strategy at key points on the individual stages.

“Sean’s strengths add great value to the team in the time-trial and hill climb disciplines, while Waldo is a good sprinter with lots of experience, as he raced in Europe two years ago.

“I’m a good climber and see myself as the workhorse in this year’s tour. I’ll add value in making crucial decisions during the races and will be there to motivate and guide my team to achieve our overall goal.”

Having put in a solid team effort to claim the local Friendly City Criterium Series, Nel said he was very satisfied with his squad’s recent performances.

The construction management honours student said they had prepared well for the student champs, despite a few unexpected challenges.

“Sean and Henno had their bikes stolen last Sunday night, so they may have some difficulty in adapting to their new bikes so close to the tour.”

While Bos and Cronjé were forced to miss out on the EP Winter Challenge the following day, their teammates Prinsloo, Nel and Gronum went on to claim second, third and fifth respectively in the 96km road race.

The team are currently on a 10-day training camp in Nel’s hometown of Graaff-Reinet to prepare for racing at altitude. 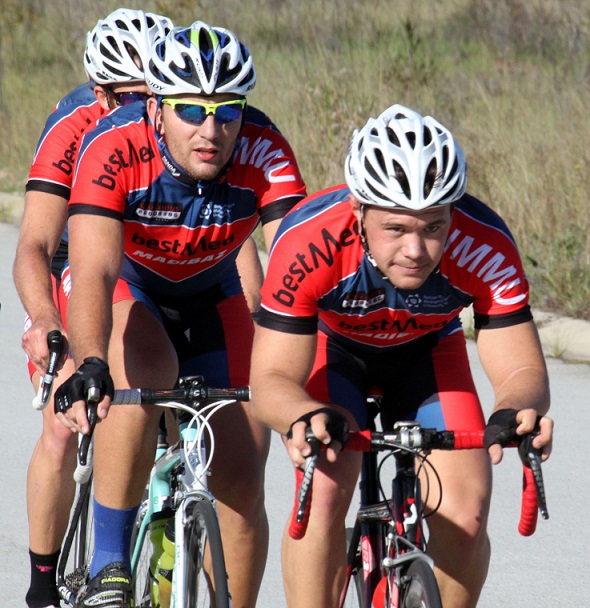 The Bestmed-Shukuma Madibaz cycling team have their sights set on victory in the team classification at this year’s Ussa Cycling Championship in Pretoria from July 1 to 3. Here captain Gerrit Nel (front) puts his head down in front for teammates Waldo Gronum and Henno Cronjé (obscured) during a recent criterium series race. Photo: Alex Cooper