University of Johannesburg hockey ace Clinton Panther had much to celebrate as he scored one of the winning goals in Monday evening’s Varsity Hockey tournament final against Maties.

The 23-year-old midfielder has not only been a stalwart in UJ’s campaign, but will also form a vital part of the South African attack during the Rabobank Hockey World Cup in the Netherlands from May 31 to June 15. He jets off to The Hague on Wednesday.

The Varsity Cup final was a hard-fought affair that ended in a penalty shootout after the teams finished on two goals apiece after normal time. Panther was one of the UJ players who found the net in the sudden death phase.

“There was great unity in the team and we were all motivated and driven to achieve a common goal,” he said about the team’s success. “I tried to work hard during the tournament and hope there are many more to follow.”

He added that the series had given many varsity players an opportunity to perform and show their skills. “I believe this tournament is a great positive for the future of hockey.”

Finance student Panther has been part of the UJ side for the past five years – a journey he believes has given him a sturdy foundation. “I really enjoy the tempo and combinations our team play with.

“We follow a touch fitness regime, which I believe has contributed a huge amount to my performance. Internationally and provincially it has given me a strong base to work from.”

Panther’s hard work on and off the field paid off when he was selected for the national senior men’s team that will contest the World Cup.

“I’m over the moon to be able to represent South Africa at the Rabobank World Cup. It’s a major tournament and a prestigious event for any professional sportsman.

“I’m extremely excited, feeling good and hopefully all my preparation will pay off.”

He was equally excited about joining a “well-balanced team” in The Hague.

“Our team is a combination of experience and youth. This is always good because the younger players have the drive and determination to achieve, while the experienced ones have the stability and knowledge to raise the standard of the game.”

As one of the latter, the utility player, who matriculated from Michaelhouse in KwaZulu-Natal, hopes to be a role model for his teammates by playing every game with “heart and determination”.

“Hopefully I will be on top of my game so that I can create opportunities for others. As a team, we need to encourage one another.”

He added that if they played to their full potential they had the ability to create a few upsets during the World Cup. “We just need to stay focused.”

Although the team have been doing individual preparation, they have not had much time to prepare for the tournament as a unit due to funding issues.

“As they say, ‘it’s not the dog in the fight, but the fight in the dog’ that makes the difference,” said Panther.

“We will go to World Cup and give it our all. We intend to create some upsets and improve our world ranking, which is 11th at the moment.”

Panther was first selected for the SA team in 2010 and says that first international against Zimbabwe remains a highlight.

“Singing the national anthem before the game and knowing that I had achieved my goal was an awesome feeling.”

Representing his country at the London Olympics and singing the national anthem alongside his brother Brandon (also a member of the national squad) in Malaysia in March this year were other standout moments.

Panther, who has played in all the national age group sides on his way “up”, said he used these platforms to gain experience while trying to add as much value as possible.

He has big dreams and would like to represent South Africa in Rio and beyond.

“As hockey in South Africa is not deemed a professional sport, I would like to start my own investment company one day.

“I would also like to continue coaching hockey so that I can inspire others to enjoy the game as much as I do.” 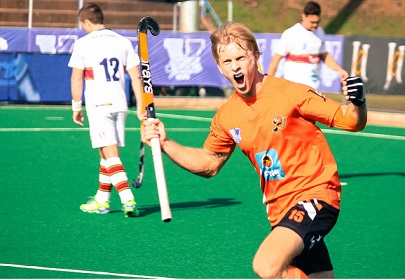 University of Johannesburg hockey star Clinton Panther was a stalwart of the side who won the Varsity Hockey tournament on Monday, a mere two days before he leaves for the World Cup in the Netherlands. Photo: Christilee Jansen