It will be lights, camera and action for small screen star Hlubi Mboya this weekend – not in front of the cameras, but as a rider in the world’s biggest mountain bike stage race.

Mboya, best known for her role as Nandipha in the hit soap opera Isidingo, will be riding alongside Bestmed-ASG’s Zandile Ndhlovu in the challenging Nedbank sani2c in KwaZulu-Natal from May 15 to 17.

Although relatively new to mountain biking, Mboya has proven that she is up for the challenge having already completed this year’s Cape Epic.

“I only started riding last year, but I’ve always been active and I love a challenge that pushes me to my limits.

“When I was invited to compete in the Epic, I could not turn down the opportunity,” said Mboya, who was hooked from the first moment in the saddle.

“In a way, the sport echoes life. In mountain biking you have to conquer different terrains and life is about that.

“You also have to change gears from time to time, just like you would in everyday life.

“Life also dishes up its fair share of steep hills, but, once you are at the top, a beautiful downhill awaits.”

Mboya and Ndhlovu had an immediate connection after meeting on a training ride last year.

So, when Bestmed-ASG team manager Owen Botha started scouting suitable candidates to partner Ndhlovu on multistage events like the Nedbank sani2c, Mboya was a natural choice.

“She is such an amazing spirit, with the most infectious laugh,” said Ndhlovu, who conquered the 270km race from Underberg to Scottburgh last year. “We always have fun on the bike.”

Botha, who will be riding support for the two women, has high hopes for them.

“Both Zandile and Hlubi are motivated and hard-working individuals and a good fit. I don’t expect them to have any problems.”

Mboya, who has put in eight months of rigorous training for this year’s race, is equally positive. “I’ve spent many hours in the saddle, so I’m ready to race.”

The 36-year-old actress is no stranger to adventure. On International Women’s Day (March 8), she summited Mount Kilimanjaro as part of an all-female group supported by the United Nations.

“Our aim was to highlight the importance of women’s rights and education. By doing this, I wanted to say to every African girl that they are able to conquer their own mountains through education.”

Attempting these challenges for causes has become a recurring theme for Mboya.

At the Epic, she raised funds for the Diepsloot Mountain Biking Academy which empowers underprivileged youngsters with basic learning and life skills.

Through sani2c, Mboya hopes to inspire young women to overcome their fear of failure. 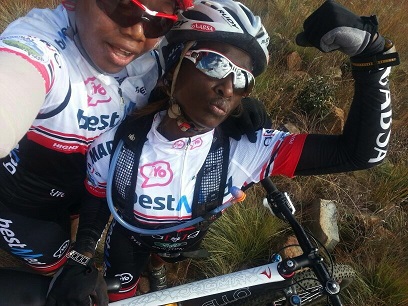 Zandile Ndhlovu and Hlubi Mboya are ready to take on the Nedbank sani2c mountain bike race in KwaZulu-Natal from May 15 to 17. Photo: Supplied