Veteran stage racing champion Yolande de Villiers is preparing to take on the second edition of the three-day PwC Great Zuurberg Trek, which starts at Addo near Port Elizabeth on Friday.

De Villiers, who rides in the colours of SasolRacing, will use the 209km event as part of her final build-up towards the national mountain bike marathon championships in Pietermaritzburg next weekend.

“I’m very excited and looking forward to the race,” said De Villiers, who will be teaming up with husband, manager and training partner Henties for the very first time.

“It’s going to be good to race over terrain that’s nice and technical. I’m especially looking forward to the jeep and single-track in and about Addo and the beautiful views.”

De Villiers will be familiar with sections of the route, having previously competed in the 80km Extreme mountain bike challenge during The Herald VW Cycle Tour.

She said the race would in all likelihood be won or lost on the queen stage on day two, which featured over 2 000 metres of climbing in the Zuurberg range.

“Hopefully we’ll bring our climbing legs, but we must also ride safely and not have any mechanical issues.”

The Oudtshoorn-based rider is currently on good form after a stellar season that saw her and teammate Ischen Stopforth claim the African women’s jersey at the Cape Epic in March.

Earlier this month, she also triumphed in the mixed category at the Old Mutual joBerg2c alongside Franso Steyn and finished on the second step of the Nedbank sani2c podium alongside Johan Labuschagne.

“I’m really happy with my form but there’s still lots more work to be done. It’s addictive – you just train harder and harder and get better and better!”

The 41-year-old, who only started riding competitively at the age of 33, said her stage racing abilities had only improved with time.

“I’m definitely now more equipped to deal with the demands of stage racing, especially the endurance side and strategically too. You get wiser with time and learn lots of lessons along the way!”

“Even when I’m out shopping, I’ll dice somebody and see if I can be first at the till. And I’ve got the best support base in my husband and kids.”

The former Cape Epic and national marathon series winner said she preferred racing in the mixed category as it forced her to push herself even harder.

“In a mixed team, the woman is usually weaker and riding at her limit. Racing in the women’s category is more about looking after your partner and working together to get the maximum out of each other.

“Henties is technically very good, so I’m going to eat his dust in the single-track but I’ll push him on the uphills.

“As our team manager, he doesn’t get a chance to race much, so I thought the Great Zuurberg Trek would be an amazing event for us to ride together.”

De Villiers said she was anticipating sharing “war stories” over a glass of wine each evening at the Zuurberg Mountain Village, which will be the race village for the duration of the event. 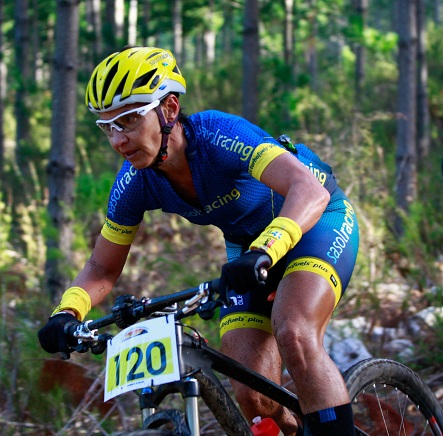 SasolRacing’s Yolande de Villiers will line up for the three-day PwC Great Zuurberg Trek as part of her final preparations for the national mountain bike marathon championships. The race starts at Addo near Port Elizabeth on Friday. Photo: Oakpics