With a R50 000 prize purse, luxury accommodation and challenging three-day route, organisers of the PwC Great Zuurberg Trek have signalled their intent to elevate it among the top mountain bike stage races in the country.

According to race director Brad Jackson, the Eastern Cape event – which takes place near Addo on the outskirts of Port Elizabeth from May 30 – had what it took to rival the best of the established stage races.

“By offering increased prize money we’re hoping to entice some of the top riders to experience the race while it’s still a young event.”

But, said Jackson, the organisers’ emphasis would be on delivering a quality experience for the whole field.

“Although we would like to see some big names in the race, it’s certainly not only for pros.”

He said the sponsors and organisers had invested heavily in exceeding riders’ expectations and that the exclusive field would be limited to 150 two-person teams to ensure a comfortable experience.

“All riders who enter this year will get first option for an entry next year, and we believe that 2015 is going to sell out fast once word gets out of what’s on offer.”

Jackson said Hayterdale Trails, which formed the highlight of the final stage, already offered some of the best mountain bike trails in the country, having hosted the national cross-country and downhill championships.

“We’ve also invested months of labour and expense to build another two stages that will be worthy of a stage race of this calibre.

“We didn’t simply look for existing roads and tracks but have gone in with an experienced team of trail builders and constructed kilometres of new single-track.”

At the end of a hard day’s riding, he said, participants could look forward to relaxing in comfort.

The Zuurberg Mountain Village would be the official race village for the duration of the event, with luxury hotel and tented camp accommodation options available, said Jackson.

“The camp boasts proper brick and mortar ablutions with plenty of hot water and no queues.

“Meals will be served in the comfort of the hotel restaurant and marquee dining area alongside the swimming pool.”

In addition, he said all participants would receive rider goodie bags valued at over R1 000 each, which included a branded race jacket and other items.

He said having a title sponsor like professional services giant PwC on board had helped raise the profile and improve the possibilities for the event.

“PwC is a respected brand in SA and their existing commitment to mountain biking means that they are well-positioned to recognise a great stage race to get behind.”

Enter at www.greatzuurbergtrek.co.za before May 7. 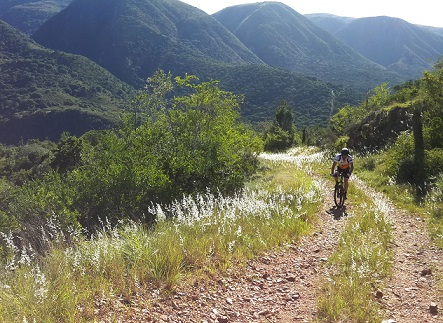 Spectacular scenery, luxury accommodation and a R50 000 prize purse are just some of the aspects that organisers believe will put the  PwC Great  Zuurberg Trek among the best mountain bike stage races in the country. The three-day race starts near Addo, just outside Port Elizabeth, on May 30.  Photo: Full Stop Communications