Former national time-trial champion James Perry showed his natural flair when he launched a solo attack with kilometres to go to take an unchallenged victory at the Emperors Palace Classic in Johannesburg on Sunday.

The 34-year-old Team Abantu rider claimed his maiden win in the 102km feature race, which passed by OR Tambo International Airport, in 2:17:55.

Perry said the racing started at a furious pace, with Team Abantu putting two of its riders – Reynard Butler and Myles van Musschenbroek – into the first break of the day.

“This put Team Bonitas under pressure and we let them chase for about 50 kilometres.

“I noticed that they were starting to tire just before the break was caught, so I told my team to start the attack.”

This resulted in a select group of about 15 riders going clear with about 30km to go and chasing down the two leaders, Van Musschenbroek and James Fourie (Team EuropcarSA).

“Just before we caught them, with about 12 kilometres to go, I launched my final attack and nobody was able to follow me,” said Perry.

“So I managed to ride solo to the finish due to the efforts of my team.”

He said they had originally planned a sprint finish for teammate Nolan Hoffman – who had won the points jersey in the Bestmed Tour de Boland and Mzansi Tour in recent weeks – but mechanicals had put paid to this strategy.

“I had the best legs on the day, so the weight fell on my shoulders.”

In the women’s race, Lise Olivier (Time Freight-Velo Life) held her nerve to win a small bunch sprint to the line.

Olivier – who was runner-up in the Tour de Boland after winning the final stage – crossed the line in 2:47:40, one second ahead of Anriette Schoeman (Africa Silks-Bestmed) and An-Li Kachelhoffer (Activate Drinks). 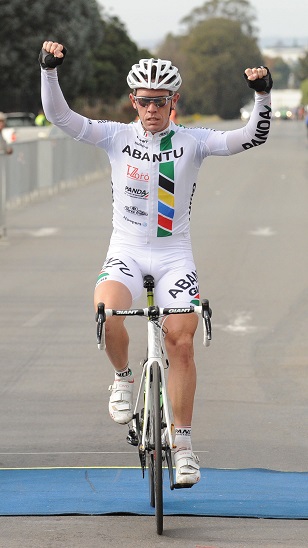